What are your thoughts on the NFL Protests?

Home What are your thoughts on the NFL Protests? 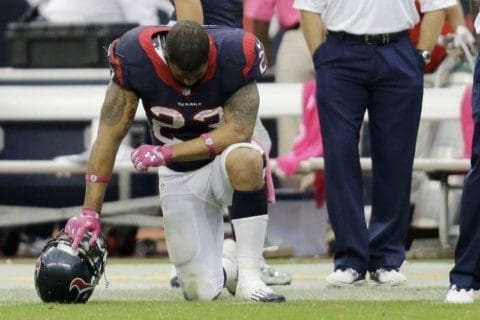 I think that how President Trump chose to approach the fact that NFL players were silently protesting was terrible. He tried to take away their rights to protest and so this made the NFL community unite even more. Almost all NFL teams started to exercise their right to protest by kneeling, sitting on the bench and linking arms in their form of unity since the president’s disrespectful words toward them.

Hey Joseph! I loved your article because it was about a very controversial topic recently. Trump definitely came off a bit harsh when he addressed it. Although I know there are injustices in this world, I feel that there would be a better way to show your emotions than kneeling during the anthem. Kneeling during the anthem is pretty disrespectful. I feel that sports should be used as a get away from all the issues in the world. It should be used as a way that people came come together and just have fun. Bringing these issues and political pressures into the game and the sports world eliminate being able to use sports as a way to forget about the issues. Thank you for your writing and I can’t wait to hear more from you!

Dear Joseph :
I am delighted by your post “What are your thoughts on the NFL Protests,” because I agree with you on how the way Trump addressed the situation was terrible and it could have been handled differently. I think Trump should have respected the Player’s opinions if they wanted to kneel or not.
One sentence you wrote that stands out for me is: “He tried to take away their rights to protest and so this made the NFL community unite even more.” I think this is important
Thanks for your writing. I look forward to seeing what you write next, because I like how you wrote about this sensitive topic. I also really like how you bought this topic up I do not really see many people talking or writing about it.
Jocelyn Martinez.

It’s interesting to see how even the most small and peaceful forms of protests are still looked down upon by someone who was supposed to represent the people like the former president. The NFL player’s actions seemed to have more affect on the media than Trump announcing that he thinks NFL players who are expressing their right to protest should be fired.

“I think that how President Trump chose to approach the fact that NFL players were silently protesting was terrible.” You’re comment on how President Trump reacted directly mirrors how I felt on this incident. Having watched this on live television, I believed these players were doing the right thing by silently protesting on the national stage. The reaction from our president should’ve been more professional especially when these players have the right to protest in this manner.

A big misconception was that kneeling was a sign of disrespect towards America and its people. The symbolism was in support of those who have been targeted just like you mentioned. It would be interesting to see how Kaepernick was affected after his silent protest especially how the NFL treated him.