Home We Shall Overcome 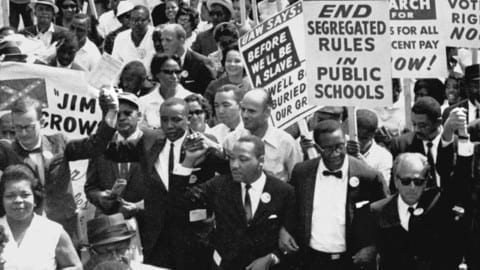 Through the history of the United States, the country has not always been known as “The Land of the Free” due to the use of discrimination and segregation against the African American population. The Civil War officially ended the era of slavery; however, African Americans were still placed in inferior positions once again. Because of this, the racial minority of the time had to step up for their own cause that would later create the Civil Rights Movement from the rights that weren’t granted to them. As the movement progressed, African Americans expressed their true rights through boycotts, protests, and marches. Parts of the movement like Brown v. Board and the Montgomery Boycott were major points that changed history in the 1950s-1960s. Although, because of the laws known as the Jim Crow Laws, lack of equality and cultural mixing caused an exceedingly divided society. To concur the division, The Civil Rights Movement was a major turning point in our history and a piece that would turn the people’s individuality into unity for all to bask in.

One of the main turning points in the fight for equality in the Civil Rights Movement was the Supreme Court Case, Brown v. Board. Through this history-changing case, the end of segregation of schools was announced to the nation to destroy the saying of “separate but equal”. A precursor for this case was the case of Plessy v. Ferguson, a case that set the stage for the equal society we have now although at that time racial segregation was upheld. When Brown v. Board came about a few years later, it addressed the problem of segregation between white and black students in schools that violated the equal protection clause. From such a system, the segregated schools were creating an inferiority complex among the black students compared to the white students which was not legally permissible. In 1953, the final choice was made in a unanimous decision to declare segregated schools unconstitutional. Chief Justice Warren ended this memorable case during the Civil Rights Movement by stating, “We conclude that in the field of public education the doctrine of ‘separate but equal’ has no place. Separate educational facilities are inherently unequal..” (Warren). As a result of this case, a new hope was brought into the eyes of African Americans to create a better life for themselves not only in schools but also through any public facility and person in the United States.

The Civil Rights Movement continued into 1955 with the Montgomery Bus Boycotts that began with the spark from Rosa Parks’ arrest. The boycott lasted for thirteen months with the help of the Montgomery Improvement Association headed by Martin Luther King. During this time, the African Americans of Montgomery, Alabama, refused to ride on the buses to peacefully protest the segregated seating between whites and African Americans. Because of the boycott led by the African American population, segregation in buses was stopped in 1956 through the statement, “any law requiring racially segregated seating on buses violated the 14th amendment to the US Constitution…guarantees all citizens regardless of race equal rights and equal protection under state and federal laws” (History Channel). As a part of the Civil Rights Movement, this boycott gave African Americans another piece of their freedom that was originally taken away due to discrimination from the white population.

The Civil Rights Movement started in the 1950s and ended in the 1960s which represented a time of hatred and freedom all at the same time. In the book, The Help by Kathryn Stockett, the fight for liberty is shown through the stories told by the maids of Jackson, Mississippi, that gives a different perspective of what it was like to live during those times. Many of the same types of events that occurred in the real world also happened in the book that described the harsh, segregated environment that had to be lived through daily. One of the characters, Aibileen, expresses her frustration of this segregation between races by saying, “I want to yell so loud that Baby Girl can hear me that dirty ain’t a color, disease ain’t the negro side of town” (Stockett). The quote gives a moment where Aibileen wants to protect the white child that she is taking care of from all the atrocities of life even though it is inevitable she will learn. However, that was the true meaning of the Civil Rights Movement, to gain the correct values and teach others of what they are to create future generations who are accepting of other races. By that idea, the movement was for African Americans, and the white American population both to create a better society for themselves based off of the correct values towards each other. The hatred towards the African American race was a result of the long built up tensions through history and activities started initially by the slave trade.

As of now in the United States, discrimination against races is frowned upon in every aspect of a person’s daily life. To create such a way of thinking, the Civil Rights Movement led the way for a better society, America, and the overall community. The court cases, laws, protests, and boycotts would all contribute to the next generations of Americans to leave behind the days of discrimination and segregation. The Help provides an insight of what the fight for freedom meant to African Americans and what had to be done to gain their freedom. Years later it would just be known as “history”, but the Civil Rights Movement was one of the main movements that brought the United States to equality, independence, and most of all, unity.