Walk out Today, For a Safer Tomorrow

Home Walk out Today, For a Safer Tomorrow 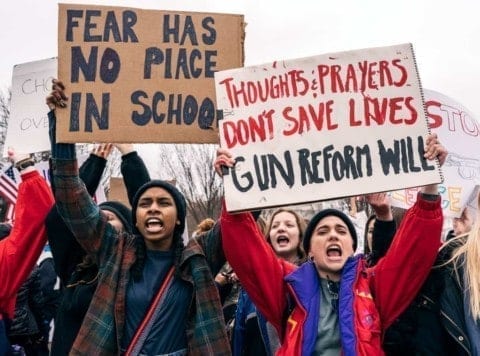 The United States has the highest rate of mass shootings in the entire world, which is why I don’t understand how we can stand here and accuse other countries of being terrorists. “The United States takes up 5% of the world’s population, but is responsible for 31% of all mass shootings.” This means a person is more likely to be killed at work, or at school then they are when they travel overseas. We shouldn’t be scared of other countries; we should be scared of ourselves.

A school shooting is an act of terror, yet, we still count how many lives that makes this time, and then hope for the best, without making any political change! Our education systems are being told to “prepare for the worst” because that is a possibility in our society now. How is telling a child’s school to anticipate an intruder a solution to these mass killings? Our education is supposed to prepare us intellectually for elementary school leading to middle school, then high school, and then to college- NOT, stay quiet kids, this is what we’ve been training for, a gun threat.  If we can’t take care of our own people, and especially the children living in this country then what is the point? I don’t understand how the second amendment, someone’s right to bear arms, exceeds any student’s right to live. I understand that our Constitutional rights cannot be altered, but there must be a push for policy change when it comes to gun ownership. There needs to be, not entirely gun banishment, but strict gun control in every state. This country is in dire need of laws that require thorough background checks, more extensive gun-training classes, and stricter age limits because lives are repeatedly being stolen by the pull of one trigger.

Jugal K. Patel writes in the New York Times,  “A gunman killed 20 first graders and six adults with an assault rifle at Sandy Hook Elementary School. Since then, there have been at least 239 school shootings nationwide.” After the shooting involving Sandy Hook Elementary School, 438 people have been shot, and 138 of them were killed. Now Parkinson, Florida shares in this devastating pattern, having the second deadliest shooting since 2012 after losing 17 lives from their community.

People may feel discouraged because so many reported shootings have occurred in the United States, and it seems lives only continue to be lost, but I do believe that change can happen if we demand it together. Judge Memorial will be participating in the March 14 school walk out, so I encourage you to make posters for that day or invite your own school to show support for this important cause too. This walkout is meant to support the lives lost in Florida especially, and anyone else affected by these tragedies. Students are rallying together, and advocating for one another to ensure our safety when we attend school. I believe that with persistence we will be the change this Nation needs, and everyone involved will make all the difference.

I was just reading this when I got the idea to see if someone had written about gun control on youthvoices.live. I feel so lucky to have found your post!

“A school shooting is an act of terror, yet, we still count how many lives that makes this time, and then hope for the best, without making any political change!” This is the sort of realness I think a lot of news sources have been missing. There’s this weird desire to stay neutral, but this isn’t really a neutral subject like a water line or zoning. Being outraged at there having been 200 shootings is perfectly natural, and the idea that we have to reach some outrageous number before people recognize that is ridiculous. There needs to be more overt discussion about this. This isn’t a party issue, it’s a bipartisan issue. To many of our lawmakers are afraid of the NRA. The power the SuperPAC is outrageous, especially when children have been the center of most of the attacks. The power of greed in out capitalist system is insane.
If you want to find more about how people are currently covering gun control, why not check out the article I was reading? If you’re really passionate about this, you might find it interesting.

It is unbelievable that there have been over 200 school shootings nationwide in the US! Averi, I am so happy that you chose to write about this because obviously there needs to be more discussion about gun violence. I cannot believe that there has been no change even though hundreds of people died, and numerous CHILDREN died without their parents for no reason. This issue is one of the main reasons I am losing my hope, confidence, and love for this nation. I specifically love your second paragraph, and how you started it with “A school shooting is an act of terror, yet, we still count how many lives that makes this time, and then hope for the best, without making any political change!” That statement is so strong and so important and I wish our government was smart enough to make change for the better. I found an interesting article about a “gun control moment” in America right now that discusses how congress and the government is under pressure with the Florida/school shootings issue. Here it is: https://www.nytimes.com/2018/02/25/us/politics/gun-control-congress-governors.html Thank you for keeping this a relevant topic and sharing!

Averi,
I am so glad your wrote on the topic of gun control because it is a big issue and is prevalent. I agree with you when you emphasized on the point where we need to protect our own people and educate them. After the Parkland shooting, many people our age have been speaking out against the issue of gun violence. I think this is our time to make a difference in our world and even if it’s making posters because the little things add up. I recently found this video of a student from Parkland and thought it was inspiring: https://www.cnn.com/videos/us/2018/02/17/parkland-florida-student-emma-gonzalez-anti-gun-rally-fort-lauderdale-full.cnn Let me know what you think and thanks for writing!

Hi Averi,
The worst thing we can do is having these people continue to have the ability to come into our schools. There needs to be a place for guns in society in america because a full on ban would not be effective but schools and cities are not the place. It’s not an issue of rights its an issue of trying to protect our people. there needs to be protections for those who need it. The laws need to change and putting pressure on lawmakers is the way to do it.

Averi,
I think this post is really interesting. I agree, I think there’s a huge problem in the language we use, as a nation, to address people born in the USA who commit acts of terror. People in positions of authority are quick to call people from other countries terrorists, especially branding people from Middle Eastern Countries, but when an act of terror is committed in the US, like the school shooting that recently took place or say, the Las Vegas shooting, the language isn’t terrorist. The language used is “mentally disturbed,” or “terrible person.” The mind set about the word terrorist needs to shift from someone outside the country, especially the mind set around people from The Middle East, because the fact is that terrorist attacks happen in the US, and they happen by people who’s families have lived in the US for generation upon generation.
I think schools walking out in March is a brilliant idea, because it’s a peaceful way of protesting, and if enough people are involved the media and people in positions of power are going to have to at least recognize that there’s a huge problem, even if they choose to ignore it. People’s voices need to be heard especially on topics like this.

Averi-
Thank you for writing this. This topic seems to be talked about constantly, especially after the Parkland shooting. Like you, I am frustrated. I am confused as to how this keeps happening and why there hasn’t been a substantial amount of change. As a student, there is an ever impending sense of fear instilled in my mind- What if a shooter comes into school? What if someone I love is shot? When is the next shooting going to happen?. Unfortunately, shootings are starting to seem ‘normal’. I think change is necessary and long over due. While I hope to see governmental action, the school walk out signifies that something is changing- and I’m here for it. If you’re interested, I found this article that talks about how ‘thoughts and prayers’ are not enough: https://www.shes-it.com/human-rights-we-dont-need-thoughts-and-prayers-anymore/