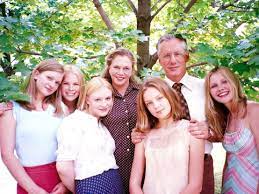 The book I chose as my free reading book is The Virgin Suicides by Jeffrey Eugenides. The author, Eugenides, is a Pulitzer prize winner of Middlesex. The Virgin Suicides is a standalone, but has since been adopted into a critically acclaimed movie. Written to critique the perils of deep male obsession, the book was bothersome to read, yet it drew me in along with the boys.

The name of the book is in fact the abstract plotline. Five sisters stuck in their middle-class home are obsessively watched by a group of young boys. These narrators make it their mission to understand the attractive girls across the street, yet their obsession deteriorates the girls. Cecelia, the first sister to pass, commits in a suicide that can only be described as the beginning of a plague. Cooped up by their unrelenting mother, the rest of the four sisters find no escape other than death. The boys, twenty years later, recount their little knowledge of the girls in an avid attempt to understand them.

The most disturbing part of the book is the male gaze. Immediately the boys’ obsession with the Lisbon sisters is taken to the extreme. “Bursting with fructifying flesh” (6) and “I’m going to watch those girls taking their showers” (8) explain the boy’s motives with the girls. Sexually the boys are inebriated but still, they can’t be bothered to help the girls and their wretched situation. When the sisters call to them for help they are so distracted by the image of being their heroes that they fail to do just that. In the end, the boys place blame on the sisters instead of on their desires. “They made us participate in their own madness, because we couldn’t help but retrace their steps, rethink their thoughts, and see that none of them led to us.” (243)

The Lisbon sisters were calling to the boys in an attempt to get away from an abusive parenting situation. Mrs. Lisbon was oppressive, especially after Cecelia’s suicide. She locked the girls up giving them no time to clear their heads, escape tragedy, or attempt a normal life. After Lux, the boy’s most favorite sister, returned home late to curfew all privileges were revoked. The girls were withdrawn from school, punished severely, and had no escape.

The book still leaves me struck in wonder. I too want to understand the girls and their motives. Did they feel Cecelia calling to them? Were they tired of being imprisoned? Had society’s whispers about them impacted their mental health? Readers will never know as they can only understand the story the boys are still trying to piece together. I think the beauty of the book is that you relate to the boys in wondering but you can see their transfixiation in a negative light. This book is disturbing yet captivating in a way that makes me want to reread the boys’ evidence one more time with them.

This book sounds like it is very interesting and disturbing at the same time. I find it interesting that the book is told from the boys point of view, and although they seem like horrible people, I am curious to know more about how they viewed this situation.

Dear Emmy, I love how detailed your book review is. It makes be want to read Virgin Suicides!