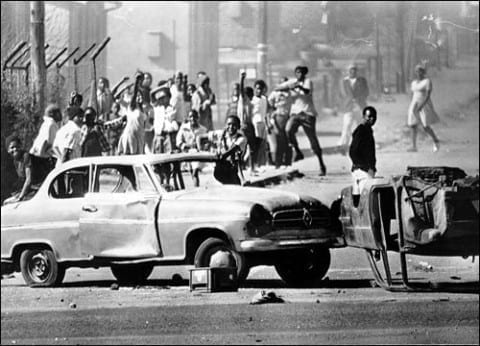 Today South Africa decided to rise up against the brutality of a white-only government to change South Africa. In 1976 in Soweto, South Africa, 10,000-15,000 of students protested against apartheid. The students didn’t want to speak white Afrikaans language. 175 of students are killed by the government. “A students protest by children in the poor township of Soweto proved to be a watershed movement in the fight to dismantle apartheid in South Africa” Peter Magubane says. In other words, the poor Swedish child is sacrificing for justice and eradicating racism.

The school of the students start at 8:00 a.m. and they prayer at the school and sing about Africa to be safe. They felt that Africa was in danger, and they asked god to make everyone happy in South Africa, “Our school started at 8 a.m., as the tradition has had it, with the singing of the Lord’s Prayer: “Our Father who art in heaven, Hallowed be thy name, Thy kingdom come.” But on this day, instead of the Lord’s Prayer, we sang “Nkosi Sikelel’ iAfrika,” “God Bless Africa,” which was our signal tune to march out of the school premises. And we all joined at the time.” Murphy Morobi says.

I am excited about your post because it shows how the students went out to the street and protest because they didn’t want to speak white Afrikaans language.

One sentence you wrote that stands out for me is: “They feel sad, they say this is Anti, because they dead the truth, to defined the country and make everyone equal.” I think this is sad because it show how the students want to be free and speak there own languages they didn’t want to speak white Afrikaans languages.

Your post reminds me of something that happened to me. One time when I was in Yemen and they Yemeni people went out and protest because there were other country wanted to take over and they end up killing the Yemeni people.

Thanks for your writing. I look forward to seeing what you write next, because I liked the way you it because next time I will try come and visit your page because it show a lot of idea because it show how people still cares about the students who died back then in Africa.