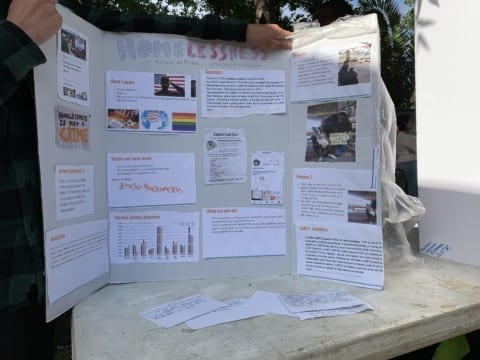 Being an upstander means that stand up for issues that go on around you and you aren’t a bystander and just watch when you have the power to do something with your voice. It also means that you care about the issues that go on in the world and wanting equity for everyone in world. I think before this certification I wouldn’t be able to call myself an upstander because I don’t really protest for certain matters.

Something I learned about myself as a student that I can present without using note cards and in a professional way. I’m glad I found this out because now I can look more professional in projects and only use the note cards for backup.

As an upstander I learned that there are 2,700 people in Oakland who were homeless in 2018 I never knew it was that many I just assumed it was a lot. But since it 2019 and it’s still a big issues I know that Oakland hasn’t done anything to fix it and the number of I see homeless in the street has grown. Also, that its hard to create awareness for an issue and get people to listen to you issues. That’s why I have even more respect for big upstanders like the people who created the hashtag black lives matter movement.

Some next steps That I would like to take as an upstander is to get more people to actually donate to our canned food drive from Oakland and San francisco. If project was life long I would want to open up a homeless shelter and help get people place to sleep in the night and to stay clean because everyone wants to stay clean and have somewhere to sleep at night that isn’t the streets.

Advice I would give to other upstanders is to try to use social media as a way to get people’s attention and to try to involve people in their community to get try to get the word out. Because you can’t get as much things done without the help of other people. For other students I would tell them to not give up because I know they are able to get their work done. Also, to keep trying and never give up period.