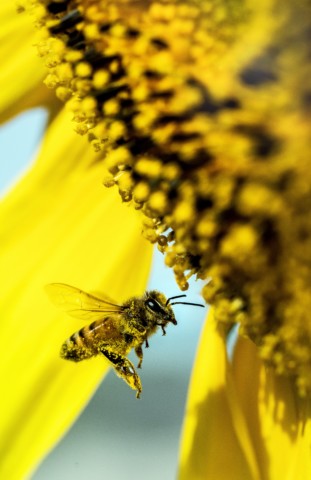 Wild honeybee populations have been declining in recent years. One cause that was seriously underestimated is urbanization. A study at the University of Michigan shows that the reason this is such a big factor is that it alters the sex ratio of bees. In more urban areas, there is a higher ratio of male bees to female bees. This is a direct result of less ground space for female bees to nest in. “‘These findings have potential implications on bee population health and pollination services, since male and female bees often have different pollination behaviors,’” (Glaum, 2019). Since male and female bees typically pollinate different plant species, this has the chance to limit pollination for many plants. The change in ratio also means fewer mates for male bees, decreasing bee populations.

Bees are an essential part of the world’s ecosystem and they help produce most of our food. Over the past 15 years, bee populations have been declining at an unsustainable rate. The main reason for this rapid decline is a parasite called the varroa mite. It infects hives and spreads disease. In addition to the parasite, uncareful management of bees has contributed to their demise. Bees are transported to California during the cold winter months in the Rocky Mountains, which is not good for them. They are introduced to pesticides, pests, and other diseases within hives as well. Without bees, food prices could increase substantially and ultimately change the way we live. The US government also decided to spend less money on honey bee research due to budgeting problems. This came as a shock to many people, considering the decision was made after 40% of the managed bee population was lost over one winter. Tracking the population of bees is important in order to protect them and continue getting our own food. “Williams said it is “surprising” that the USDA made the decision to stop tracking the honey bee population, stating that it compounds the importance for independent studies to continue so scientists can understand the long-term trends of honey bees, not just for the sake of research but to allow policy makers to make sound decisions in the future,” (Jacobo, 2019). It is our responsibility to conserve bee populations, since a majority of their population decline is due to human error.