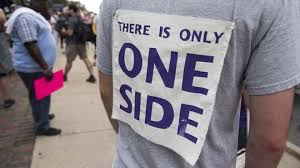 323 Million people all live in one country, and we may use fences, tape, and walls to divide ourselves, but there will always be roads, bridges, and connections that unify us as a people and as a country.  America values many things but some of the most important are free speech for all, unity with love, as well as diversity.

According to the First amendment every American has the right to free speech. This means that whether everyone, or no one agrees with their opinion they have the right to share it and not only that but their opinion must be respected. “We have to allow extremists to speak because freedom of speech is the foundation which defines the university” (Hayes 13). Not only is free speech the foundation for our universities but for our entire country. Therefore we can not restrict that right just for certain people or for certain things because then it gets very confusing where that line is drawn. Deciding who gets certain rights and who does not, divides us as a country even farther and we can not afford that. This country has been, and always will be about togetherness. The first 3 words in the constitution are “We the People,” it does not say we the whites, blacks, Mexicans, and Jews. Because this “country is for unity their hands are joined together there is hope in their eyes” (Dikeni).  This line perfectly describes America beautifully. We are not trying to be more divided but rather more united, standing together as one, with hope for the future. This idea of unity is not a new concept or a foreign idea, this has been a central theme for quite some time as noted by the National Review.

“The United States steadily evolved to define Americans by their shared values, not by their superficial appearance” (Hanson 12).  This is not something we are striving for in the distant future, it is an old value, a founding principle even, that we are striving to maintain. We do not classify the US as a place where 50% of people want more government and the others want less, no we say we are a country that all wants freedom.

America this, America that, Freedom this, Freedom that. The old fashioned boring argument that America is about an unwarranted sense of Nationalism and Freedom. There is more to these great 50 states. Here we identity not by our differences, but rather our similarities, meaning our values. In the United States of America we value and believe that free speech is a g-d given right, unity is what makes us whole, and diversity is what makes us, us.