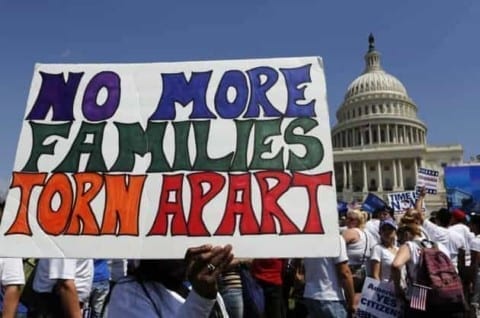 I really noticed this topic and became strongly invested in it when presidential candidate Donald Trump made incendiary remarks on the campaign trail about Mexican immigrants. Not only did he call them “rapists, criminals, and drug dealers”(Huffington Post), but also built his campaign around the idea of constructing a wall between Mexico and America. When Trump was elected president I became fearful for the sake of illegal immigrant families and what it would mean to hundreds of thousands of people. As I research this topic I see that this issue has faded in society, disappearing in the media as time goes along. When immigrants were first being deported a few months ago I would see news every day about families affected, but now I don’t see these stories anymore.  I wish this issue was still relevant and readily seen in the media.

I would really like to research more about this issue and find more stories of families affected by deportation. I would also like to learn more about the legal and logistical aspects of how this is happening currently. The topic of immigrant discrimination means a lot to me and I hope to bring light to this issue. Because of this I have included some articles about individual people’s stories.

This is a really good piece that draws attention to an important issue. I can also relate to the topic since a lot of my relatives from my mother’s side are Mexican immigrants. I agree that we should draw more attention to how deportation affects people and their families. Great job!

This is a great piece Carmen and I can see why this topic would mean a lot to you. I encourage you to keep researching and learning more. Great piece!