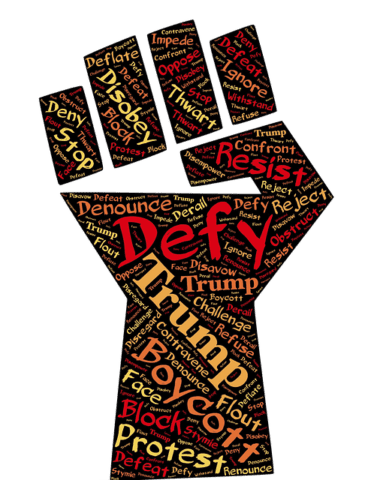 This is not only what Donald Trump believes about Mexicans and undocumented immigrants, but what many Americans believe and support as well. Well, not every American — there are citizens who don’t have a deep and unnatural hatred for immigrants. But there are millions of citizens who are not affected by these types of comments whatsoever. I am not one of them.

I am the daughter and relative of multiple undocumented immigrants. At first, I didn’t realize it was such a big deal, but as I grew older, that changed. I began understanding how it affected me, and most importantly, my family.

My father is a mechanic who generally fixes truck chassis. The job sounds plentiful to some, but I’ve seen firsthand what it’s really like for him. My father wakes up at 5am every morning from monday to friday, sometimes on saturdays if money is lower than usual. He drives two hours to and from and gets back at around 5pm if he doesn’t work extra shifts. He has been working this job for twenty years but has only had a small raise in exchange for his expertise and hard labor. My father works on his hands and knees most of the time — and if his hands aren’t covered in some oil, grime, or paint, they’re handling hot and dangerous tools that release fumes that can then affect his health overtime. He comes home exhausted and underpaid to pay bills and keep food on the table. My father has no retirement plan or savings, every dollar he makes is used to support the family financially and get my sisters and I through college. Two of my sisters are in college right now, and I am about to go to college as well. My father works to make this happen as my mother has no job. This is something american citizens can relate to, but what they cannot relate to is that my father cannot speak about mistreatment, underpaying, or search for another job because he is undocumented. Because he is undocumented, he cannot risk speaking out against his boss because he risks getting sent back to Mexico. My father can’t save to retire because he doesn’t get paid enough to save. My father is 59 years old working more hours than the average american — who works 34.5 hours per week according to the most recent data provided by the Bureau of Labor Statistics — but can’t have the same retirement perks or raises just because he doesn’t have a couple of documents.

I’m scared for my father. I’m scared that he will have to keep working until he exhausts himself until he can no longer physically move. I’m afraid of seeing him spending his senior years working a job made for younger, able-bodied people because if he doesn’t, there won’t be financial support from the government to keep the family stable. I work everyday to hopefully be able to financially support both of my parents before I have to watch them die of old age and exhaustion trying to keep a roof over their heads and food on the table. American citizens experience things similar to this, but what they don’t experience is being completely independent in dealing with financial problems because asking the government for help is not an option to us.

Because of these hardships, my life has been permanently shaped around it. I often find myself thinking of ways to be able to help my parents’ lives be easier for them in the future. I look into how to get credit in order to finally get a house that belongs completely to us and not have to worry about a landlord possibly take it away. I find myself wanting to work harder so my parents won’t have to work at all, because they have been working nonstop every since they stepped foot in this country. I find myself bettering my understanding of the English language so I can then be able to translate efficiently to my parents without having to google a word. I find myself worrying about my mother when she goes out to a store by herself because she doesn’t know English and someone may not be kind enough to help her if she were to be in trouble. I find myself never traveling out of country because it’s not fair that I get to leave and not worry while my parents stay at home by force. I find myself worrying about leaving my parents in the house alone and coming back to it empty because the government doesn’t believe they have the right to exist on american soil. I find myself thinking about all these things, and then realize that these thoughts and emotions have never ran through millions of people’s heads. It’s a privilege for them, to not worry about if someone they love is not being respected and treated right just for being in the country without a certain piece of paper. But it is a common problem, one that the privileged need to be aware of in order to make change and make undocumented immigrants’ lives easier.

Dear Anonymus;
I am amazed by your post “Living without papers”, because of the fact that you have the courage to tell your family history and how hard is for some immigrants living in the United States. As you said in your story for immigrants life is harder and they have to work harder to have the things they need to provide for their families. One sentence you wrote that stands out for me is “the average American who works 34.5 hours a week” I think this is really explanatory because it is true and many Americans have the privilege that they can work way fewer hours than someone who is an immigrant who sometimes has to even work the double of those hours to barely get food in their table. Thanks for your writing. I look forward to seeing what you write next because your words really make the ones who have not had this kind of life obstacles think about how others sometimes have to live. Immigration is hard the whole change living in a new country with different people maybe not even knowing the language and still working hard to give the family the best it is possible.

This is very powerful and relatable! But even if we face these hardships, we are the heart of everything! Don’t forget that.

That’s what sucks about us being Hispanic and having family who are undocumented. We have to go through these types of worries and emotions that no person should ever have to go through. We are seen as the enemy when in reality we are trying to survive and do better for our future children.