Understanding how Counter-Culture Arose in Utah 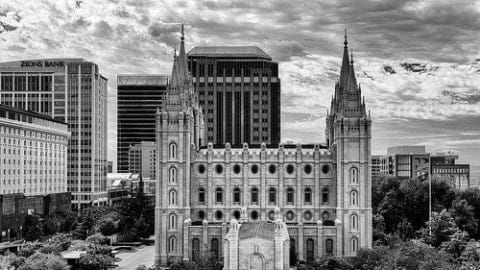 For my second part, I will be focusing on how counterculture arose in Utah. To fully understand the counterculture, we must first look at the primary culture of Utah. Utah was first civilized by Native Americans until the Mormon pioneers were prosecuted and forced to leave from the East, where Joseph Smith started the LDS church started, on covered wagons and ended up in the Salt Lake Valley from 1846-1847. Joseph Smith was killed in an angry mob and Brigham Young, his successor, was the leader of the Mormon Trail migration. The Mormons decided that Salt Lake City was where their travel ended when Young proclaimed “This is the place”, a phrase that all Utahns know from a popular heritage park of the same name.

There was a large migration to the west during this same time period where people moved from the East to the West, but non LDS members instead went to California, Oregon, Texas, and a few other western states creating the “wild west” that we all know and love. Because of this great migration, it was fair to say that almost everyone in the Salt Lake valley was Mormon besides the Native Americans and perhaps a few pioneers that decided to stop in Utah as well.

By the late 19th century, Utah began a transformation to become a state by conforming to the more American ideals of the time rather than being just a religious community. The federal government disallowed for Utah to become a state until they gave up polygamy, to allow for non-mormon settlers to mine, allow federal lands, and follow American policies. Utah secured their position as an official US state in 1896.

Present day Utah is still strongly LDS, and the Churches on every block, the Salt Lake Temple, and the LDS influence in government serves as a constant reminder of this. However, Newton’s third law doesn’t only apply to physics, but also to cultural studies: every action has it equal and opposite reaction. With 62.8 percent of Utahns identifying as LDS, there is bound to be an extremely strong counterculture.

Counterculture is defined as a group of people whose values, norms, and behavior clash with those of the prevalent culture. Mormonism is the obvious prevalent culture, and with the history of Utah, it is easy to see why it is. According to a study done by UCL, rebellion might be hard-wired into our brains. In this study, they asked people to list 20 songs that they liked, then told them what music critics thought of the song, and were asked again what they thought about the music. The people that conformed to the critics thoughts had more grey matter in their lateral orbitofrontal cortex than the people who stuck with their original opinions. This goes to show that rebellion just might be a biological issue. Rebellion and non-conformity are seen in all places in all different times in history; from Martin Luther’s Catholic reformation to the anti-war protests during the 60s, it’s strongly apparent throughout our history books.

Although Mormon rebellion in Utah isn’t as apparent, it still very much exists. If it’s true that non-conformity is hardwired into us, it’s easy to see how such a strong and overbearing culture in an area would cause for people to rebel. Although Mormonism is a relatively new religion, it still has generations of angst that has been brewing over the years. This would be an explanation as to how Utah has such a strong and distinct underground counterculture.