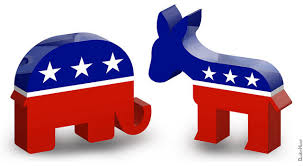 The U.S. political system is set up for two major parties, because it awards seats in Congress and the presidency with a winner-take-all method. Candidates running for Congress need only to get a plurality of the vote to be elected. In most of the states, presidential candidates get all of a state’s electoral votes — the way in which presidents are elected, state by state — as long as they win a plurality of votes in that state.

French sociologist Maurice Duverger theorized in the 1950s that this kind of setup leads to what is effectively a two-party system. Duverger’s law states that “ Third parties can’t compete because there is no prize for winning. Plurality-rule elections structured within single-member districts tend to favor a two-party system, whereas the double ballot majority system and proportional representation tend to favor multipartism.” For example, 15 or even 25 percent of the vote. This leads voters to choose candidates who are most likely to win, and it leads the parties to try to broaden their appeal to half of the electorate — and ideally more. Parties at risk of splintering will do whatever they can to avoid third-party candidates. When voters favor a party’s political ideals but have a choice between the two candidates who both support those principles, that party will lose the election because those candidates will split the votes, allowing the other party to win with a plurality.

The two-party system also could promote governmental stability because a single party can win a majority in the parliament and govern. “In a multiparty country, on the other hand, the formation of a government depends on the maintenance of a coalition of parties with enough total strength to form a parliamentary majority.” The weakness of the ties that bind the coalition may threaten the continuance of a cabinet in power. The stability shown by the government of the United States has not been entirely due to its party system, it has been argued, but has been promoted also by the fixed tenure and strong constitutional position of the president.