Trying to Make a Change

Home Trying to Make a Change 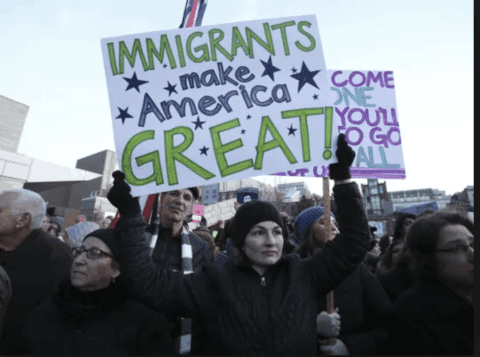 Hi, I’m Jana. My friends and I tried to make a change in this world. Molly, Vasha, and I really cared about immigration issues in our country since we live in New York City, a place founded by immigrants. We live in such a diverse place and would hate to see immigrants getting mistreated. Our goal was to bring awareness on immigration issues in the country. We wanted to keep New York City a sanctuary city in that process. Our project was fairly successful in the sense that I had anticipated a larger failure. We were able to bring attention to an important topic. Even if it was a small effort, an effort is still an effort, rendering the project itself as a success, in my eyes.

We were to make our blog reach international viewers. This was a big success since immigrants are coming from our country. To be able to reach people that don’t live in our country, shows them that there are people that care deeply about this issue and want immigrants to feel safe a happy moving into our country. We were able to reach viewers in India, Ireland, Sweden, and Australia. It was surprising to reach viewers outside of the country since we were focusing on immigration issues in the United States, however, there are immigrants all over the world. They should know that immigrants should be respected everywhere. Immigrants should be welcomed in many countries, so to reach international viewers was a big success in my eyes.

In addition to reaching international viewers, we were able to get many views in general. We got 130 views, which is a lot of people. To think that about 100 people saw our blog posts is crazy. The larger our audience, the greater impact we can make. If we can show people how to treat immigrants, why they are valued and important to our countries, and the struggles that they face leaving their home country. To be able to reach a large audience was big success.

We were able to bring awareness to immigration issues by reaching international viewers and getting many views on our blog posts. If I had go through journey all over again, I would make more memes and try to discuss how immigrants are helpful to our country. I feel like a lot of people think that immigrants hurt our country, so I’d like to prove that otherwise. I would try to use social media more efficiently. Overall, this was pretty cool and empowering. My friends and I were able to make a change and a small change is better than no change.

Goodbye! Check out my blog: http://nycasafehaven.home.blog

Jana, it makes me so happy that there are people like you in the world who are spreading awareness of immigrant mistreatment. It seems that in recent years, there has been such a negative bias towards immigrants, when in fact, being exposed to multiple cultures and customs makes us more open-minded people to new perspectives and ideas. Being a first generation American myself, I know that many immigrants are hard-working, intelligent people, and the diversity they bring is what makes America great. I love that your blog has spread not only in the U.S., but to countries overseas such as India, Ireland, Sweden, and Australia. I wish you and your friends future success with your blog and I believe that every view makes a difference in the world.

Here’s a quick article supporting why immigrants are important! 🙂 https://www.globalcitizen.org/en/content/how-immigrants-benefit-society-trump/

Thank you so much for your comment!! It really made my day. I’m really happy to know that I’m not alone in this fight!! ❤️❤️