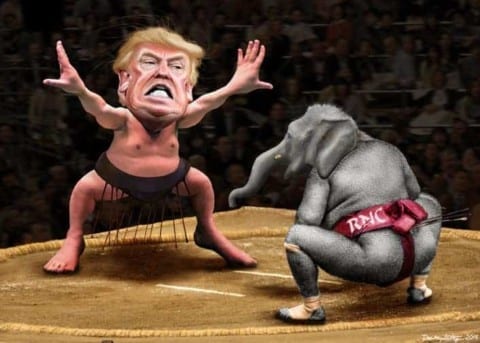 Why is the current political atmosphere in a position to allow such an unconventional candidate?

After researching this topic, it is clear that the popularity of Donald Trump, or more precisely the stark contrast from a career politician he represents, has resulted from frustration with the stagnant nature of the American political system. Evidence of this comes in the support of such statements as “they have this great indignation, whether it’s Benghazi or the emails… nothing ever happens.” (Sarah Murray, CNN) This along with other statements made by Trump garner lots of support, showing that people are fed up with career politicians and the stagnation they bring along with them. http://www.cnn.com/2015/07/17/politics/donald-trump-summer-surge/

Along with this, the long-standing feud over immigration law has also resulted in a surge in popularity of the candidate. According to the Washington Post, in an article referring to the origins of his success, “A lot of people dislike immigrants” (Jeff Guo, Washington Post). Now, this may seem to be a very generalizing statement, but it does get the point across. Many people are tired of the wishy-washy stances taken by politicians, and the lack of progress. Although his stance may seem controversial, the fact that he has sworn to take action is something many people admire in him. Some of the favor people have with his plan may also stem in nationalism or hate for Mexico, as he proclaims not only to keep immigrants out but to do it at Mexico’s expense. In conclusion, it seems that long-standing issues in America are finally boiling over, allowing said issues to dominate the political field and allow candidates like Trump to flourish.
https://www.washingtonpost.com/news/wonk/wp/2015/12/12/the-four-basic-reasons-that-explain-why-donald-trump-actually-is-so-popular/