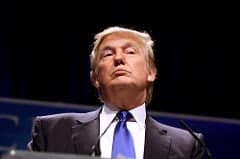 Many people believe that Trump should not be president because of his out of the box thinking and his quick temper but they are wrong.  He knows many things about being a leader as he is the leader of a giant business.  If he stays strong and commanding like he does in his business nothing can stand in his way.  He will do anything to get his way and will move anyone out of it to do so.  This is a very strong trait for a leader because it will push others to help him on decisions.

Trump is also a man who can make a deal.  All his life he has been in business and in that time he has struck hundreds of deals.  He has no problem making the right trade if it means a little loss.  Spotting a good opportunity will also be helpful and through all his experience there is nothing Trump knows how to do better.  He can run the government like a business, make laws for the better of the whole thing and take any opportunity necessary to gain.

Adding to our security is one of Trumps most wanted tasks.  He wants to take gangs off the streets and will do anything to do so.  His plan to legalize drugs will stop drug dealers because they will no longer need to sell to the under aged, making it only possible for over age people who want them to get them.  It will be much harder for gangs to bring in income because they would not be able to get it from drugs.  This would slow down and stop many gangs from getting weapons and taking away the threat.

Don’t worry about all the hate, Trump is saving our country and will continue to do so for the next 6 years. People can hate him, but that makes his supporters love him even more. Keep America Great in 2020

I like your poem about Donald Trump because you gave good statements on why he is the right person to be the U.S president. A lot of people ignore all the stuff you said and focus on what he tweets. Or just call him a racist. One sentence that you wrote that stood out to me was “All his life he has been in business and in that time he has struck hundreds of deals”. I thinks its a great point ignored by many. Thanks for your writing. I look forward to seeing what you write next, because it is always good to read from different perspective to expand your view on the world and not be a prejudice.

I agree with you Sergio

I am glad you are so headstrong about this topic. However, I regret to inform you that this is not a proper way to debate a topic to this magnitude

I am sad to say that I disagree with your article “Trump: a Great Man.” because of the many things Trump has done to people and this country. He has been heard talking about women in nasty ways, has not released tax returns (probably because he hasn’t payed them) and wants to deport Muslims due to the “risk” they impose to the country. Clearly, he has not been a great president and things have to be done in the oval office to prevent testings done by North Korea.

One sentence you wrote that stands out for me is: “ He knows many things about being a leader as he is the leader of a giant business. ” I think this is absurd because a businessman and the president of the U.S are to completely different things. As the leader of a large company, Trump is used to making plans go the way he wants. As president he has two other branches of government that can box him out and the Constitution

I do not agree with you that Trump is a great man. One reason I say this is he is a selfish person that lies about his ties with Russia. Another reason I disagree with you is Trump is pro-life. It is the mother’s child, nobody else.

Thanks for your writing. I look forward to seeing what you write next, because I am happy talking politics with someone I know that I can beat a debate at.

Don’t be sad to disagree with Ronald 🙂

Although I am inclined to agree with your complaints about the personality of our president, Donald Trump, continuing to bash him will not help the country. Instead of debating his personality and the validity of sensationalism media surrounding him, I would recommend we discuss how to best help him help our country.

Because of some of the traits Ronald mentioned – President Trump is willing to move anyone out of his way to get what he wants, his leadership experience with his business – he may be a difficult president to work with, but he is what the electoral college chose. If he builds his presidency around undoing the past work of Democrats, and the next Democratic president moves to undo the work of Republicans, we will never move forward as a country. As such, we need to stop focusing on personality traits and start focusing on projects – and not just debating a party’s hard-line responses, but actually engaging research and studies to prove that whatever new bill coming through isn’t just a partisan piece of legislature but is backed by some of the most intelligent people of the modern age, with confidence that it will improve our country.

Finally, your last statement is crude, and not at all welcoming to further conversation. Remember, argument and debate is not about “winning” or “losing”, it is intended to move something forward. And in this case, let’s try to move forward our understanding of how to help our government help us.