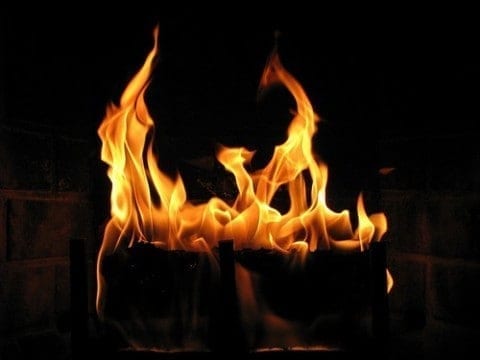 The Aztecs believed that every 52 years, one full cycle of their solar year, the world would end and in order to prevent that from happening they preformed Toxhiuhmolpilia, the New Fire Ceremony. They considered fire to be one of the essential elements of the universe and their god of fire, Xiuhtecuhtli, was the generative force for the ceremony.

To prepare for Toxhiuhmolpilia, all fires were extinguished, the city was cleaned, pregnant women were locked away and their faces were painted blue so they wouldn’t turn into monsters, and children’s faces were also painted and they were kept from falling asleep in order to keep them from turning into mice. Then all commotion was stopped and people climbed onto their roofs to wait for the new fire.

The priests who conducted the ceremony would lead a war captive to the peak of the volcanic mountain, Mt. Uixachtecatl, just outside the main city. The priests were extravagantly dressed as their gods wearing intricate masks, feathers, and cloaks. When the the Pleiades constellation reached it’s zenith, and the Yohualtecuhtli star was shined bright in the middle of the sky, the human sacrifice began. The High Priest, dressed as Xiuhtecuhtli, cut out the war captive’s heart then started a fire in his chest cavity. If the fire did not die, then Xiuhtecuhtli was reborn and the sun would be renewed. The new fire was carried across the empire signaling the world/universe had not ended. On the other hand, if the fire failed to light in the sacrifice, then the Tzitzimime (star demons) would come down to earth and slaughter every human, ending the Aztec Empire and destroying the world.

This was a wild ride from start to finish. I’m not sure what I was expecting, but I guess I should have predicted the human sacrifice. This paper was very informative and had a lot of words I couldn’t figure out how to pronounce and I’m into it. Thanks for teaching me something new.

Andreas, this is a very unique topic, and I hadn’t heard of it previously. I enjoyed reading of you research on the Aztec rituals and culture; I enjoyed learning how the Aztecs attempted to prevent the end of the world. I look forward to reading more on this subject.

Toxhiuhmolpilia is something that I have never heard of before, and is quite an interesting aspect of the Aztec culture. I really enjoyed reading about how their beliefs on the world were displayed, like this ritual that is held in order to prevent the world from ending. The description you have is very detailed and very alluring to any kind of reader. Well done!

Hey, sweet stuff you got here, definitely a lot more interesting and epic than most of the research papers out there… literally. I’ve never even heard of this crazy fire ceremony stuff, but learning about it makes me really glad that I wasn’t born at this time in an area ruled by the Aztecs, because they’re psycho and I don’t think I would have survived. Hearing about gruesome sacrifices really makes a person respect the little things in life, like microwavable pancakes and faucets. But seriously, I’ve never heard of this and look forward to learning more about it.

Your paper is on a really intresting topic, it was something that I never knew existed and it was cool learning about something that so central to a group of people i don’t know much about. It will be fun to see where you go with this paper, good luck dr.dre

Andres,
Your topic is very interesting and I really like it. I enjoyed how you told about the ceremony one full cycle of the solar year. I have learned a lot from this little bit that you have posted and I can’t wait til I get to read more about it.

Andreas, what an interested topic you’ve picked. I really enjoyed reading about the Aztec culture. The idea that the Aztecs believed the world would end was always known to me. But, I didn’t know they tried to prevent the world from ending. That ceremony seemed intense and their beliefs as well. I would love to hear more about it thanks for sharing