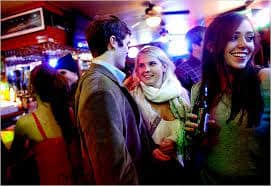 In dystopian literature, things like procreation, passion, and love are viewed as threats towards society. Sex is viewed as meaningless, casual, and emotionless. It is strictly for pleasure and if it wasn’t, you would be considered a threat. This idea of meaningless sex can be greatly echoed in today’s world and our hook- up culture. The APA describes hooking up as “ brief uncommitted sexual encounters between individuals who are not romantic partners or dating each other.” Sex has become meaningless and casual, much like it is portrayed in dystopian literature. This social shift began in the late 1920’s when  automobiles became common. Young adults were able to go out instead of staying at home under their parent’s watchful eyes. This trend became even more apparent in the 60’s after the rise of feminism and the liberation of women. Birth control became much easier to obtain and sex- integrated college parties became much more common. The media also play an enormous role in the creation of this trend. Movies, books, and music portray unrealistic sexual scenes. The media suggests that sex can be fun and pleasurable with “no strings attached” which normalizes this behavior.

In an article published by Miranda Kulp, titled “The Hook-Up Culture: How An Entire Generation Forgot How To Actually Date Someone” the author talks about how  “Our generation needs to go back in time, put down the iPhone and get to know people by conversation instead of text. Delete Tinder and go out to meet people in your own town.” Our generation is living in a time where technology controls our lives. It control our lives so much that it is reflected in how we form relationships with other people. Technology and the media encourages this behavior of casual and emotionless sex. Kulp ends her article by stating “Once we dump our college dating habits and reinvent ourselves for the real world, our generation may find that under our heartless exteriors, the hopeless romantics we’re afraid to show do, indeed, exist.”

Sofia,
I totally agree with your post. Sadly hookup culture is very prevalent for our society. As young adults, we need to pay attention to this, and make wise decisions. I believe that our generation is almost forgetting how to get to know one another. People is todays world are skipping many important steps. Here is a link that you might find interesting. Thanks for sharing!
https://www.elitedaily.com/dating/entire-generation-forgot-date/708825

sofia,
Your post about hook up culture was very interesting to read. This link i read about how hook up culture being bad for our emotional health really ties in with what you were writing. https://everydayfeminism.com/2016/02/hook-up-culture-is-sexist/ I especial agree with what you said about how this generation is really reliant on technology for even meeting people.

Sofia,
I totally agree that this is a prevalent part of society. I especially agree when you say, “Our generation is living in a time where technology controls our lives. It control our lives so much that it is reflected in how we form relationships with other people.” It distorts how we see life and other people. In this article https://www.psychologytoday.com/blog/happiness-in-world/201006/the-effect-technology-relationships
it says, “we find ourselves subtly substituting electronic relationships for physical ones or mistaking our electronic relationships for physical ones.” I would love to see another post on an example of a positive relationship. Than you for sharing.

Sofia,
I think that the Hook-up culture that exists today is a very interesting social aspect of the times. It is very interesting how someone who wrote a long time ago could predict this in the future. I often wonder the same question and I believe that there is a possibility that we went wrong in society by glorifying people we call “famous”. If you look at most famous people they are in and out of relationships constantly and it seems that not many can actually sustain a health relationship. I believe that the media glorifies this and that could be a reason that the culture exists.

hello sofia,
i totally agree that there is a real and prevalent hook up culture though I don’t think that dystopian literature I views meaningless sex as a threat to a free and open society. I think the powers in dystopian novels fear love not sex and those are two very different things. they fear love because it connects people and allows them to explore and change themselves. though we live in a age of hooks ups i do not think we live in an age without love. marriage and monogamous relationships are still prevalent despite this. I think hook up culture is a result of changing values and views on sex like you mentioned with the changing role of women. the society in these books allow sex since the species could not continue without is and in some cases glorify it since it is the most primal of actions. what all of these books really have in common with respect with sex is an inability to connect with one another preferring to isolate themselves no matter how close they actually get to another person. Id love to hear more from you on the idea of sex versus love. thanks!

The hook-up culture is a very real part of society especially for young adults in high school and college. It is very interesting how a writer from the early 20th century would have incorporated this idea into a dystopian work as becoming a very prevalent part of society because today’s dating world has a lot of similarities to early dystopian literature.