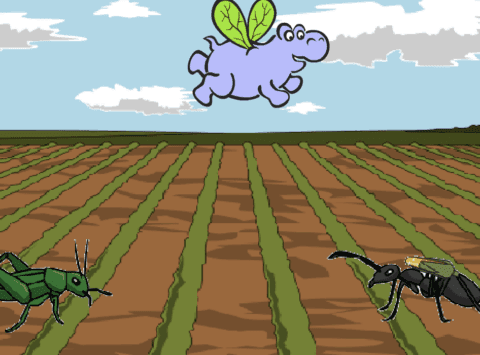 I adapted the classic story “The Ant and the Grasshopper” by Aesop and turned it into an interactive scratch animation. The story was originally about a lazy grasshopper and a hardworking ant. The ant was hard at work during the summer to collect food for the winter. When the ant suggested that the grasshopper begin preparing, he was ignored. However, when the winter came, the grasshopper, who procrastinated so much that he had forgotten to collect food for winter, had found himself dying of hunger. The ants on the other hand, who were working hard all summer, had plenty of food and when winter came, thus they were prepared. Using scratch, I created an animation that gives you the original story, along with an option to see how things might have worked out if the grasshopper had done his work when he was supposed to. At first the grasshopper might’ve been exhausted from working in the hot summer sun, but in the end he would’ve been prepared for when winter came. Furthermore, the grasshopper might have been able to befriend the ant. In order to complete the animation, I first had to create a script containing both the original and alternate endings to the story. I then had to create storyboards to plan out what everything would look like in my animation. Finally, I used scratch to bring my story to life!

Here is the link to my animation and my script so that you can check it out:

Veronica I found this story to be very interesting and to be quite accurate especially in my own life as a high school student. I tend to procrastinate a lot and it usually doesn’t help me when trying to control my stress levels. When I finished reading your story it reminded me of a time I came across an article that spoke about the pros and cons of procrastination and how it’s much better for our own personal health if we just do things when they need to be done. I thank you for writing about a topic that is so common ans used.