Home To Be American 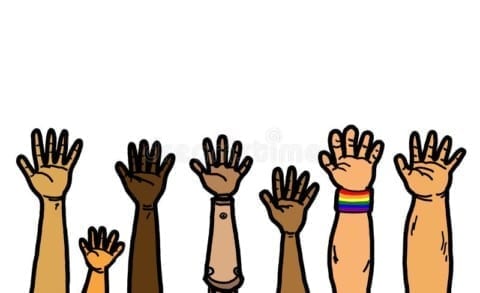 What it means to be American is different for everyone. Everyone has different views and beliefs. No two Americans are the same. What it should mean to be an American is to have freedom and to not be judged by who you are as a person. As of lately I know it’s not the same. I found in multiple articles that the U.S is losing what it had or what it should be and isn’t as great as people say it to be. Take a look at what Trump has said to the public, take a look at his past. I know I shouldn’t make this political but isn’t that where it all starts. The one person who’s leading us, the one person that this country is supposed to follow.

Some of the things Trump has said are unbelievable. He believes foreigners should not be in this country when all of us are foreigners to this country. It shouldn’t matter what we look like. In Nick Gass’s article he stats something Trump said in an interview which is “ I have black guys counting my money. … I hate it” (Gass 14) ,  Trump goes on to say “Laziness is a trait in blacks. It really is, I believe that” (Gass para 14). This doesn’t just relate to black people too, close to 20% of the U.S is foreigners. How does it sound that the person leading this country is saying things like this. He’s racist. He makes people feel there not supposed to be here and that they don’t belong. How can one person support this? Everyone, not just immigrants or someone with different colored skin should be ashamed to be called an American

Another big part of America is the thought of if you have money then you’ve won in life. In an article by Jeremy Engle he talks about and says “Success is more important than happiness” (Engle para 2). That one really stood out to me because I know so many people believe this. That money and success will buy you happiness and that it’s more important than being happy from something you love. For some people it might be like that and you know what, that’s great for them but a lot of people can’t go and do whatever they want whenever they want. A hobby for example or maybe you have a tradition that you love to do no matter the circumstance. Life is so much more than money. I personally believe that and yes I know kids this age probably don’t or shouldn’t think about those things. But for me, I have. I have some things that make me so much happier than I think money ever could. American values or beliefs are out of line because of what we are taught at a young age.

A big one America deals with or is said to be a huge part of us is equality. The first paragraph kind of covered this but that was more political and beliefs in that viewpoint. Stated in the University of Portland handbook it says “all people are created equal” (University of Portland Handbook para 3) which is from the Declaration of Independence. From the beginning we’ve had these rules or laws that say we are all equal, but it doesn’t translate over to the real world. It’s just a saying us Americans use. Look at the Three-Fifths compromise that was created. Three whites would count as five African Americans when it comes to voting.  It shouldn’t be this way, I don’t see why it’s so hard for some people to accept others just because they’re different. There’s no room for racism in this country, or anywhere. It’s just really sad seeing things like this happen. We need to do more as a country to show to people that were all equal we can’t just say it.

I think that America’s beliefs should be what they first were said to be. We have all the right stuff down on paper but it doesn’t correlate over to the real world when it’s in use. Like I said before in the Declaration of Independence it says “all people are created equal”. If everyone followed this and used it this world would be different in every way. Every country would be better than what they are.

Engle, Jeremy. “What Do You Think Are the Beliefs and Values That Define American Culture?” The New York Times, The New York Times, 24 Apr. 2019, www.nytimes.com/2019/04/24/learning/what-do-you-think-are-the-beliefs-and-values-that-define-american-culture.html.

Gass, Nick. “The 15 Most Offensive Things That Have Come out of Trump’s Mouth.” POLITICO, POLITICO, 9 Dec. 2015, www.politico.eu/article/15-most-offensive-things-trump-campaign-feminism-migration-racism/.

Hey Jack, I really like your ideas in this post. The way you used Trumps words directly against him to say he is racist is very powerful and provides a strong argument that cannot easily be refuted. I also love how you explained your own thoughts and laid out why you feel that way about happiness, it makes the reader take a second and think about what their thoughts are on the subject. Overall a very strong piece and I think you did a great job explaining your point of view on the subject.