Home To be American is to fight 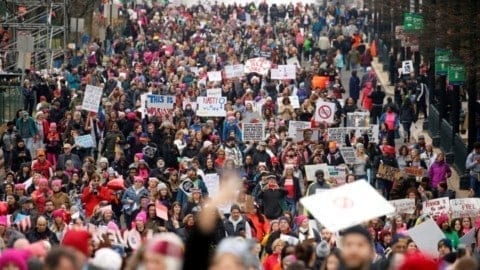 I enjoyed reading your post. I like how you used evidence from different sources to back up the idea that discrimination is something that needs to be addressed. I agree that Americans should be able to access their natural rights, and it’s sad that many people aren’t treated the same as others soley because they look or act “different”. I feel that many people think mainly about skin color when the word “discrimination” is used, but discrimination is so much more than that. People are also discriminated against based on gender, sexual orientation, beliefs, etc…. I thought you addressed that concept well in your writing. Here’s a link that talks more about natural rights for Americans and also legal rights. https://www.thoughtco.com/what-are-natural-rights-4108952. In the last paragraph of your post you state, “It does not happen naturally, we cannot expect our basic rights to just be there without fighting for them”. What I’m wondering is if we have to fight for our natural rights, then are they really natural? Should we have to fight for our natural rights?
Another concept that I agree with is that we, as Americans, need to work together in order to institute change for issues that we greatly care about. Not everybody agrees on how certain topics should be addressed and when we don’t agree with something, we citizens have the right to say so, and that’s what’s so special about America.

Hi Prerna! I loved reading your essay. You did a great job providing evidence from multiple sources including the Emancipation Proclamation, Civil Rights Act, and the U.S. Constitution. I also enjoyed learning about how many groups of people are discriminated against, since my essay was based on only Native Americans. I was able to learn new things! Such as the fact that “There is no federal law protecting employees from discrimination based on sexual orientation or gender identity in the United States” (“Lesbian, Gay, Bisexual, and Transgender Workplace Issues). This is so sad! I completely agree with you that we need to fight for our rights, especially as youth since we are the next generation to lead our country. In a time of division and fear, coming together to fight for a common cause is very rewarding! Have you ever been to a march? What is your opinion on school walkouts? Do you think they are effective?

Hi Prerna!
I really enjoyed reading your paper, it had a focused claim and great evidence. I completely agree with your views on this topic that there is inequality and if we want to progress in life we must work for it. I think the way you phrased this essay made it that much more compelling and made me understand what you were trying to say. The inclusion of the 13 Amendments and the Emancipation Proclamation brought a new view to your claim. I thought it was interesting how you said that our nation probably will never be perfect and made it obvious that there are flaws in our society. Reading this makes me wonder why can’t America ever be flawless or perfect? Do you think there is anything we could do to make that happen?

Hey Prerna,
I like your opinion about to be American is to fight, I also talked about America history told us what we should be. I regard American history is a “fight” history, fight for freedom, fight for equality, and fight for our rights. You use a good related to the book The Absolutely True Diary of Part Time Indian we read these days, that is a strong evidence to explain some Americans still don’t have the rights and they struggling everyday. You also use suppose in your 4th paragraph, that’s make the essay more convincing and more diverse. It is an amazing essay! When I read this article, I can feel it is very powerful!

Dear Prerna,
This argument paper was amazing. The way you used your words and voice made it a very compelling read. As I was reading this I realized that we have very similar views on a lot of topics. I agree with your statement that having rights isn’t what makes you a American. There is so much corruption in this country and it is hard to unify ourselves because not everyone wants to be unified. I was going to talk about gun control is my paper, but I decided to leave it out, so I am happy that you touched base on the topic. I think it is fascinating how you also acknowledge that “humanity has never and will likely never be perfect” which I 100% agree with. I think it is interesting when people use the claim “Make America Great Again” because it makes me question, when was America ever great? I am curious what you have to say on this topic. Once again, great essay!