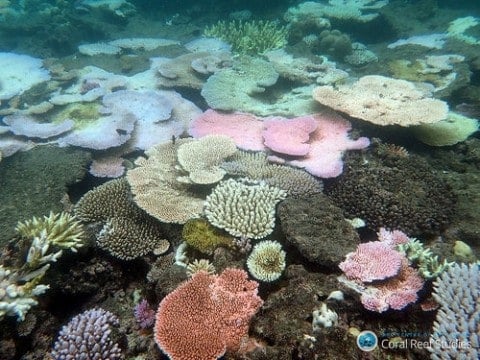 Today, coral reefs are facing more stressors than they ever have in modern history. An estimated 50% of reefs have been lost within the last 30 years, with annual die off continually increasing. If this trend continues, 90% of global coral reefs are predicted to die off by 2050. Stressors placed on corals include global warming induced coral bleaching, ocean acidification, harmful tourism, overfishing of keystone species, increased pollution entering the ocean, and detrimental coastal construction. It would be a falsehood to say that the future of coral reefs does not currently look bleak. Ocean acidification, which occurs when increased amounts of C02 in the atmosphere are absorbed directly into the ocean, perhaps poses the biggest threat to corals. This overabundance of CO2  absorbed into the ocean reduces the pH of the water and reduces the saturation states of calcium carbonate. Calcium carbonate acts as the main component in the structures of which corals are made, and therefore low saturation states limit and have the potential to cease coral growth. The calcium carbonate structures of the corals also act as the main structure of the reef because as corals grow and die new corals grow atop of the old. This cycle continues and over centuries reefs are formed. I annotated an article on hypothesis which details the immense stress that is currently being placed on coral reefs and possible solutions to this global crisis.

Ocean acidification poses significant threats to the future of corals and the reef, but that is not to say that there is no hope for this crucial ecosystem. The absorption of C02 into the ocean and the resulting reactions, otherwise known as ocean acidification, directly correlates with the amount of CO2 present in the atmosphere. When there is less carbon dioxide in the atmosphere, there will be less absorbed into the ocean, and less stress will be placed on corals. As soon as humanity sees the immense value of coral reefs, and we decide to take action, immediate results will be visible. The reduction of carbon dioxide emissions will also mitigate global warming and assist in keeping the average temperature of the ocean from rising further. In turn, this will lead to less severe and less frequent global coral bleaching events. Furthermore, the elimination of stressors that are placed on corals at a local level will give corals the ability to focus all of their energy on combating and adapting to global stressors including ocean acidification and global bleaching events. Local stressors, which include harmful tourism, overfishing of keystone species, increased pollution entering the ocean, and detrimental coastal construction, must be eliminated, and it is not difficult to do so. Simply being an environmentally conscious tourist by never touching nor kicking a reef, by using eco friendly sunscreens, and by not littering while you visit a reef can significantly reduce stress placed on a reef. Coral reefs can be saved, but it requires global action as well as local conservation efforts.

Hey Reilly! To start I just wanted to say I love the topic you picked. In AP Bio last year we had an entire section on coral bleaching because it has become such a major problem to the oceanic ecosystem and so it’s important that we talk about it and take action in some way. I’m honestly not too surprised that nearly 70% of the northern Great Barrier Reef has been bleached. The coral reefs have the highest rate of endangerment due to lack of biodiversity according to the IUCN and so it makes sense that they aren’t able to adapt to the harsh new oceanic conditions. Here’s a website I found that might be helpful: https://www.iucn.org/theme/marine-and-polar/get-involved/coral-reefs

Hope this is helpful! -Kira

Reilly,
You did a great job of incorporating facts that showed how severe this issue is. It was shocking to hear that “an estimated 50% of reefs have been lost within the last 30 years, with annual die off continually increasing. If this trend continues, 90% of global coral reefs are predicted to die off by 2050.” I think more awareness needs to be brought to this issue because of how important it is to the world, especially with all of the movements going on about climate change and how it is negatively affecting our planet. I feel like not as many people know about the threats to coral reefs as they do about other aspects of climate change, but it is just as crucial to take steps to prevent it, as your article clearly showed. There is a Netflix documentary called “Chasing Coral” that relates directly to your topic and gives really powerful visuals of the coral reefs. You should check it out: http://www.chasingcoral.com/