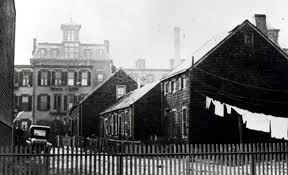 Recently in Current Events, we’ve been studying about our history. At first, I thought “Were there any legends that could exist on the island and anybody would see? When I think more on this question, I begin to wonder if there is any legends in Puerto Rico like ghosts, monsters, pirates, conquistadores, and spirits in the tapestry of tales that help shape the boricua (or native) culture.” When I started listening to Hotel Transylvania Zing, and my first impression is that when I first this movie and made me realize that even though some people are lonely because the person that they love is somewhere else, that person will always love their Zing.

In another source that I looked at, Weeksville, New York (1838– ), there was this one statement that made me nod my head in agreement with the writer Anthony Ramirez, It was: In 1838, only 11 years after slavery ended in New York, Weeksville was formed by a free black man named James Weeks when he purchased a substantial area of land from Henry C. Thompson, another free black man. This is so true because in the year 1838, a former slave James Weeks had bought a land from another free black man named Henry C. Thompson. Weeks then encouraged other blacks to settle on the property as he sold lots to the newcomers who named the community Weeksville. In 1850, Weeksville became the second largest community for free blacks in the pre-Civil War America.

During Weeksville’s success, I think that the Weeksville Heritage Center was instrumental because the houses had suffered vandalism in the ’80s, and three were renovated to depict specific time periods. Also by the 1930s, Weeksville had been almost totally absorbed by Brooklyn, and by the ’70s it was just another part of the huge neighborhood of Bedford Stuyvesant. In 2016, the center provides valuable programs that educate visitors about life for African-American Brooklynites in the 19th century.

The present-day communities in Bed-Stuy and Crown Heights can learn from Weeksville’s success because visiting the center is like stepping into the country in the middle of a city. Also, the mixture of old and new, modern and early-19th century, works. Plus Maynard made the Weeksville houses her mission and secured city, state and national landmarking. She also was a tireless fundraiser for the site, and the Society purchased the houses in 1973.

Dear joshua
even though i did the same project i can learn alot from your text.