Home This is me 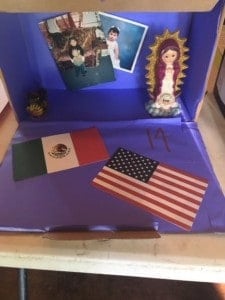 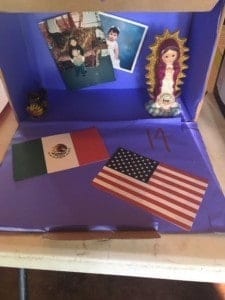 The object that I decided to add in my Shadow Box represent my counter narrative. The first item I added to my Shadow Box was a Mexican flag because I have decided that one of my races is Mexican because the majority of my family is Mexican. The second item I decided to add was the flag of the United States. I decided to add this to my box because I was born in the United States which means that my nationality is American. Moreover, I decided to add a picture of me and my little brother. This picture represent me being the oldest sibling, which is one of my assigned identities. Additionally, the other object that I decided to add to my Shadow Box was a picture of me. This picture represents my gender identity, gender expression, chosen and assigned identity. It also represents me being female. Moreover, another identity I chose to represent in my Shadow Box is me being a teenager. Additionally, I chose to add La Virgen de Guadalupe because this is a very big part of my identity. Being Catholic comes with lots of celebrations. Finally, I  decided to add a cantarito. I decided to add this because it was something that I was given my grandmother who passed away. The cantaritos remind me of her  because she had the exact same set but bigger.  And that makes the cantaritos very special to me.

Dear Emely,
I am fascinated with your shadow box, like how you used a statue of Guadalupe in your piece and add pictures of yourself. When I see your Guadalupe statue and your pictures around it; it makes me feel like she is protecting you. In addition I like how you used the american and Mexican flag it shows me that you a you are a young Mexican American girl

Dear Emely, thank you for sharing your wok. My name is Janely and I am a student at Fremont High School. Something I liked about your work is the pictures you used on it. Something I have a question about is about you races, like what are you other Races besides Mexican?
Please feel free to comment in my work in the future. The address of my student blog is http://janelyhfhs2021.edublogs.org/
!Thank You!

Thank you for sharing your work. My name is Matthew and I am a student at Fremont High School.
Something I liked about your work was that you express your identity though a shadowbox.
Something I have a question about is Would you add any more thing to your shadowbox? Please feel free to comment on my work in the future. The address of my student blog is http://matthewefhs2021.edublogs.org/2017/11/03/assignment-5/.
Thank You!
Matthew E

Hi my name is xin and I go to the same school as you and I did the same project like you and I like the way you put you things and the project you make it was really awesome and I like the details that you have in you shadowbox. and I were like to see more project that you make.

Hi my name is Jose and I go to fremont high school I did the same project as you like how you did yours. I was ipressed for that project I like the pictures and I like the detalls for your shadowbox. you do a good job move on.

Hi my name is dina and i go to fremont high school i did the same project as you. I like how you did yours.