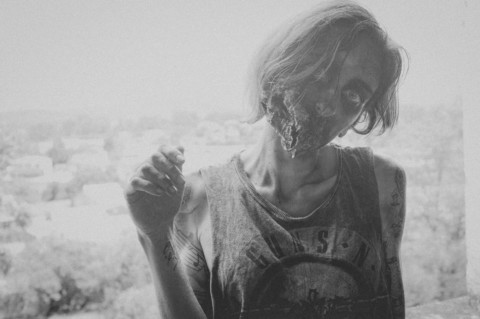 A drunk driver mysteriously had hit a deer but it became a “zombie deer.”

That deer went into the water then spread something to all the creatures in the water, those fishes got sold to the market. People got contaminated fish and started turning into zombies.

I couldn’t believe what I heard. “Attention stay cautious, stay in your house until they’re gone…”

I realized my dad was visiting. I called him and he said that he is safe, but he’s unsure if he’s gonna make it home.

When I was calling him I heard noises. It sounded like he was in danger.

I can’t let him get hurt by those zombies. I asked where he was. “At the airport hiding,” he said.

I got a  weapon and I used the car. As I arrived, I realized there were a lot of zombies.

I called my dad but he didn’t pick up. I heard his ringtone. I followed that sound. When I got there, I just saw zombies eating my dad.

How could I live without my dad? I was frozen. The zombies started coming towards me.

I just let myself die.