The Wolf In Sheep’s Clothing Remixed 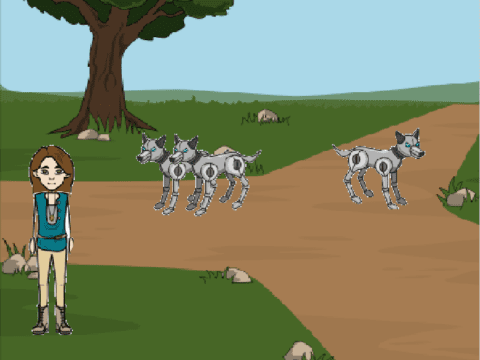 Aesop was a very famous author known for his short stories that often revealed important morals to the reader. Until now I didn’t realize that often a character’s decision provided the basis for a plot in order to even have the story exist. This is known as the moral decision. From an assignment in technology class, I actually considered for the first time how the course of the story would differ if the character made a different decision. I learned that the whole story would change as a result. I decided to test this out using one of Aesop’s famous stories.

I had fun making my Scratch project. It improved my time management and for once I didn’t do everything on the same day. In technology, I learned how moral decisions affect the outcome of a story. We were told to pick a story that was accessible to the public domain, so the most common one I thought about was a classic fairytale. Thus I chose “The Wolf In Sheep’s Clothing” originally written by Aesop. Now that I picked my story, I would have to decide how to change it so that there was a decision for the viewer to make in my Scratch animation which would affect the rest of the story. The story is about a wolf and how he finds a sheep’s flayed skin and decides to wear it. With his disguise, he fools the sheep of his identity and eats them all, one by one satisfying his hunger. I identified the moral decision being made as putting the sheep over his actual coat if he hadn’t the story would completely change. So my job was to create an alternate story as to what would happen if the wolf didn’t wear the sheepskin. I first wrote the script to my animation on a google document. This helped when creating my storyboards and doing my animation since I could just copy and past the dialogue. To plan out our work, even more, we used a website called Storyboardthat, which helped me to visualize what my final animation would look like. Then we would import all our characters and backdrops and use it to create an animation on Scratch. In making my animation I learned how to use “If, Then, Else” blocks to have the viewer get involved in what happens in the animation. This was very cool and I learned many new things.

This is the link to my script

These are my storyboards from Storyboardthat:

This is my Scratch animation below (Enjoy!):