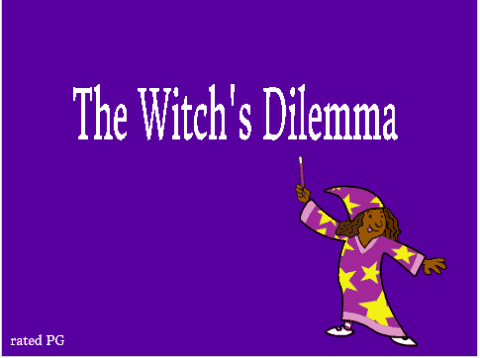 From the producer of teacher-acclaimed “The Surprise Party” comes a new and spellbinding short film- The Witch’s Dilemma!

Magic and wizardry hit American family screens once again- this time not as full-length movies, but a Scratch animation.

First of all, I must thank Hagrid from the Harry Potter series for introducing J. K. Rowling’s main character to the magical world, giving me inspiration for the concept of my story. As I lolled around on a lazy winter’s day, waiting for genius to come to me, I thought of Hagrid- his kind, caring demeanor, the way he protected Harry and brought him the biggest surprise of his life. Thus, the character of Ruby was born- an elder sister to Abby, helping Abby navigate through her new life. Our main character, Abby is sweet and innocent, always trying to do some good in the world. Avery Smith, on the other hand, though she may appear quite erudite, coyly hides her true identity from everyone around her- until Abby and Ruby stumble upon her secret.

Do not be fooled by the length of the final product. Much effort was spent to bring Abby, Avery, and Ruby to life. First, a script, or screenplay, was created. The screenplay of a play or movie writes out the dialogue and actions the characters must take. Camera cues are also included, though in this was not required in Scratch, as the only the backdrop is able to change. Out script is separated into 3 acts- an introductory act, the climax, and the resolution. After the script was written, three storyboards were made- one for each act. A storyboard is often in the form of a comic strip and shows the shots planned for a movie or television production. Storyboards help directors and camera operators get organized and decide how to film the movie. Storyboards helped our production as the movement and general dialogue of the characters at each point in the animation were all shown in the storyboards, making them a useful reference when creating the animation.

The final animation was relatively simple to make, as the script and storyboards had already done much of the work in creating the story. All that was left was to program it. Scratch uses “blocks” of code which can be attached to create a string of code. These enable a character (“sprite”), backdrop, or both to do anything imaginable, from changing colors to telling a long story, complete with speech, sounds, and movement. The movie took around 5 hours to create as I tried to make the animation as perfectly coordinated as possible- one of the drawbacks of being a perfectionist. Scratch can oftentimes be frustrating. A glitch or mistake in your code may cause the entire animation to play incoherently, and you only discover this when you play the entire animation afterward. It can also be difficult to get the code right, and time-consuming.

Despite this, I had an enjoyable time being a producer, director, screenwriter, and editor. By using creativity and perseverance, and constantly drawing on my imagination, The Witch’s Dilemma turned from a crazy bubble of an idea I was harboring as a last resort in the depths of my mind, small and fragile, to what it is today. Pressing the play button when I was finally done and watching my creation for the final time… it was all worth it.

Here is the link to my storyboards and script-