The Violence in Chicago Neighborhoods

Home The Violence in Chicago Neighborhoods 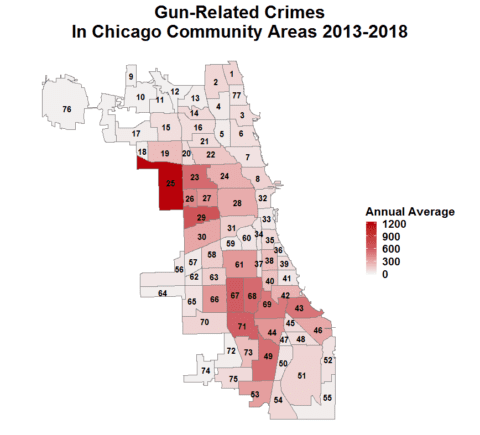 A key to Chicago community areas can be found here.

I’m sure we’ve all seen or heard at some point the violence that unrelentingly occurs in urban neighborhoods. This epidemic is tearing families apart and killing many innocent children and teens who live in these areas. Last year, 875 people in Chicago died from gun violence. In 2020 also, there was a significant rise in neighborhood shootings from 2146 in 2019, as opposed to 3261 in 2020.

The violence is mostly gang-related, however, it affects everyone living in the west side, a predominantly low-income area. Just this past new year, a couple was sitting in their home on South Buffalo Avenue when stray bullets from a shooting nearby hit the couple. The husband is in critical condition, and the wife is dealing with a graze wound. Just another recent incident occurred near the Bronzeville neighborhood. Someone began shooting and a man driving was hit in the neck, crashing his car (Abc7chicago.com). All of these incidents have the same outcome: no arrests, and no suspects.

The violence in these areas, as I said, is mostly gang-related. Talking about demographics, 75% of victims from last year’s gun violence were black. These deaths are not a result of police brutality or racism; it’s gang violence.

To further explain, most of the areas which see the most gun violence are predominantly black areas. In a map shown on centerforilpolitics.org, the communities with the most gun-related crimes are shown. This map corresponds to another map from chicagoreader.com, which shows the African American communities in Chicago. Unfortunately, it is the sad reality that we are faced with today. A lot of Chicago’s youth either find themselves in an unsafe environment in their own neighborhoods or become part of the cycle of violence in these areas through gangs.

There are many issues that feed into this violence. One of them being the school system failing these kids. In 2019, teachers from the Chicago public schools waged an 11-day strike for higher salaries. Going on strike means that for those eleven days, kids did not attend school. Kids and teens are meant to be in school, and although some maybe aren’t the best students, a school could be the only thing keeping them out of trouble. With that being said, these kids were left without school for almost two weeks. This gives many students, especially ones in bad areas, the ability to get into trouble and get involved in bad situations. Also, if these teachers were so concerned about their salary, they may not have been teaching and reaching out to their students as much as they could’ve been. Having a good teacher and role model can serve as a good example to teens and young adults, keeping them out of trouble and on the right path. I believe these teachers failed their students and continue to do so as the public school system remains corrupt.

This problem is not something that is going to be resolved right away. It is going to take the work of the entire city and local communities to pull together to drive out gang violence.

While Chicago and other urban areas are still a long way from settling the violence within their communities, the opportunity to pull together is there. It’s important we keep our youth safe and educated in areas that make it hard to do so. This change will not be easy nor quick, but it is a future we should all work to make into a reality. Every parent deserves to watch their child grow up, and every child deserves to grow up and have a chance at success.

Kerry Kasper July 28, 2019, et al. “We’ve Got the Rap of Being One of the Most Violent Cities in the Nation. Here’s a Detailed Look at Why, and Our Best Way out. – Center for Illinois Politics.” Center for Illinois Politics – Connecting People to Politics, www.centerforilpolitics.org/articles/weve-got-the-rap-of-being-the-most-violent-city-in-the-nation-heres-a-detailed-look-at-why-and-our-best-way-out.

Awesome post, Elizabeth! Unfortunately, it’s the reality that so many young black men in urban areas fall into gang-related violence. There are multiple issues that affect their involvement, and adequate education is a prime example. Here’s a link to gentrification and redlining, both of which can affect predominantly black neighborhoods. (https://www.chicagotribune.com/real-estate/ct-re-gentefication-gentrifcation-logan-square-0707-20190702-fmia4wsxdbd2ndcznlx6bselky-story.html) and (https://www.chicagomag.com/city-life/august-2017/how-redlining-segregated-chicago-and-america/)

I recently wrote a post about young black men who fell into gang violence and their efforts at exiting the cycle. Check it out! (https://nowcomment.com/documents/254010)