The Vaping Crisis – What can be done to stop it?

Home The Vaping Crisis – What can be done to stop it? 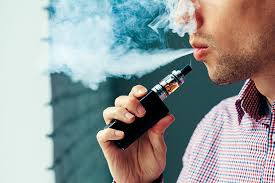 Vaping is starting to become a big worldwide issue many teens are starting to get involved with this little but addicting plastic stick. And once people try it that is when it starts to become addicting and your body is going to want more smoke, toxins, and lead in your lungs.

Once you try this you are going to have some of these symptoms like chest pain, nausea, and fevers. When you start to have these symptoms it all starts to get worse and worse and if it’s severe you might have to go to a nearby hospital and get hooked up onto a machine that can help you inhale and exhale. You might get in a coma and if you’re lucky you could get out of there alive but it’s going to be very difficult for you to survive. And according to the CDC in the mid of October, nearly 1,500 people had suffered from severe vaping-related illnesses, and 33 had died, according to the Centers for Disease Control and Prevention. People have put up many signs to stop vaping but many people who vape say who cares or something irrelevant.

That are some reasons why vaping can cause some serious damage to your lungs and possibly other intestines. So before it gets worse Just accept that your a vaping addict and stop it or it’s going to be too late. Also if you want to stop vaping you can tell a trusted adult that you are having problems with vaping and that you are addicted. Do this before matters get worse or even fatal

I agree that vaping is a problem, but I don’t think it is as simple as you might think it is. If someone is addicted to something they can’t just stop. Addiction runs deeper than that in order to help them quit you would need to figure out what causes them to feel like they need to vape. Asking for help may be easier said than done because oftentimes they don’t realise they have a problem and the 33 people that died could’ve had unrelated complications or illnesses that caused them to die. With everything in life, there are risks. Too much of anything can be bad to your health.

I agree because vaping is getting bigger and bigger as a trend people claim they just want to “try it” until they get addicted. I know 3 people who happend to overdose but thank fury they survived, as well as there also 13!

Really good post Gerardo! I also think that vaping is a serious issue that isn’t being talked about as much as it should. Since no one talks about it, everyone my age is pretty much oblivious to the negative effects on the human body and mind. Especially at such a young age, vaping is very easy to become addicted to and I am happy that you brought it up.

I agree that vaping is an issue and I am glad that you addressed the teenage population becoming addicted to it.