The Unforeseen Consequences of Helicopter Parenting 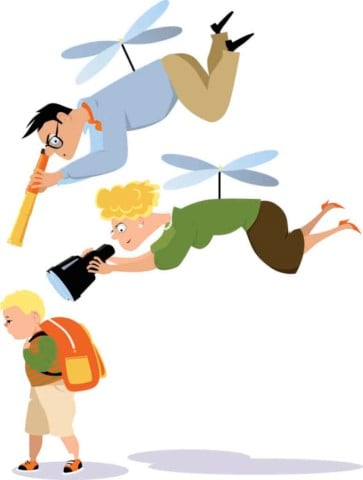 Helicopter parenting is a style of overbearing parenting that can have adverse effects on young people through stifling their course of self growth and independence. A 2018 study on some of the results of helicopter parents said that they are “characterized as overly involved, protective parents who provide substantial support (e.g., financial, emotional, physical health advice) to their emerging adult children, often intervening in their affairs and making decisions for them”. Helicopter parenting seems to be on the rise lately, as more and more parents keep a tight leash on their children in an effort to protect them. The intentions of these behaviors are often well meaning, but the long term effects typically do not help the kids in their transitions into independence and self reliance.

A 2016 study on college students at a large university in the U.S. surveyed students for autonomy support from parents, helicopter like behaviors in parents, degree of self efficacy, anxiety levels, depression symptoms, life satisfaction, and physical health in an attempt to uncover correlations between autonomy support and positive behavior traits and overparenting’s connection to negative characteristics. Through this scientific study they produced results that weren’t surefire and still require more support and more surveying, but from what they did collect they could draw results supporting the development of self autonomy in young people and and how that ability connects to other aspects of life. They concluded through their data that “higher levels of autonomy support were related to higher life satisfaction and better physical health,” and that “Helicopter parenting was significantly and inversely related to self-efficacy”. These results support a part of their hypothesis predicting that parenting traits supporting autonomy would lead to healthier people while helicopter parenting would lead to a lack of self efficacy and independence. For college students who are just beginning to enter into a version of the “real world”, self efficacy is a critical behavior trait that plays into their daily life and success in their education and personal health. They did state that “Autonomy support was significantly and positively related to self-efficacy, …. but not directly related to anxiety nor depression,” which was unexpected to me, but based upon the data they collected there was not a connection to anxiety or depression through the development of autonomy, however, self efficacy is still a vital ability for all growing people moving into adulthood. This study produced basic evidence for the positive results of autonomy support from parents, while highlighting some of the drawbacks of helicopter parenting.

While for some parents it is not easy to let your kids have some freedom, I think that without giving them exposure during their youth and letting them face and handle difficulty they will be brutally unprepared for the problems they encounter after they fly the coop. I’ve worked with kids over the past two years as a ski instructor and the amount of parents who barely give their kids breathing space during the day is shocking. I understand that the world is quickly changing and it can be scary to let your kids be exposed to a lot of the danger present around us, but they need the space to grow independently, with parent support of course. Young people need opportunities to put their bright minds to work problem solving and learning about their surroundings, if someone caters to their every need they will come to a harsh reality when they encounter life on their own upon moving out or heading off to college. What have you seen helicopter parenting do in your life? Would you consider your parents to be helicopter parents?

Hello Ed,
I really enjoyed reading your post. I agree that although the tactic of helicopter parenting comes from the purest intention of keeping your kid safe but there can be some unseen repercussions. I believe that children who have parents such as these will find themselves trying hard to impress them with unrealistic expectations. The result is mental health issues and low self esteem. Not to mention the incapability of transitioning properly into the adult world due to too much reliance on their parents. If you want to read more about this topic I found this website: http://www.tandfonline.com/doi/abs/10.1080/02732173.2011.574038
Thank you for sharing! Your post was very well written.

Ed, I believe that you have crafted a very well-written essay on the problem of helicopter parenting that a lot of people do not like to address. Many children nowadays are coddled by their parents to the point where they are unable to function later in life, leading to extremely dire consequences. As a child, my parents helped me out in many activities, but made sure that I wouldn’t build up a major dependence on them later in life. I believe that you summed up this issue quite nicely in your essay with this quote:

“While for some parents it is not easy to let your kids have some freedom, I think that without giving them exposure during their youth and letting them face and handle difficulty they will be brutally unprepared for the problems they encounter after they fly the coop.”

Thank you for sharing this piece with us, and I will post a link to a compelling article I found relating to this topic that I think you would find useful. Thank you.

This is a very well written article. I liked how you said that there are a lot more studies to be done and that we can’t fully conclude the effects of helicopter parenting, but that from what we do know helicopter parenting does have negative long-term effects on children. I personally think that my parents sometimes do to much for me, making it hard for me to make my own decisions and become autonomous from my parents. Parents should be a guiding support for their children, not the driving force in the decisions that they make and the things that they do. The best way to learn is from experience, so when parents are making all of the decision for their children they are missing out on that learning experience.

I think you would really like this article:
https://www.parents.com/parenting/better-parenting/what-is-helicopter-parenting/