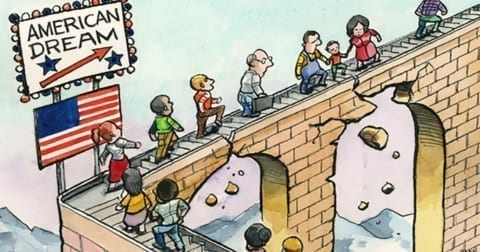 This is a audio piece written by Sid Murthy about the role of America in one’s pursuit of the American Dream. The essay is called “The Unabridged American Dream”.

Although it is not necessarily a common occurrence, there have been cases in the past where the “American Dream” was not attainable to some through just determination and hard work. For example, back during the World War II era, there was a big commotion and general fear of the German and Japanese regime. The USA at first wanted to stay out of it, but were forced to enter the war after a bombing on Pearl Harbor on December 7th, 1941. The bombing shook up many Americans, in the fear that the Axis Powers could not be stopped,but this attack also affected many minority groups in the USA, Japanese-Americans in specific. After the bombing, many Americans started to believe that now all Japanese-Americans were spies for Japan, which was not true at all. While many of the victims and officials knew most of these accusations to be false, President Roosevelt regardless signed Executive Order 9066, which ordered all Japanese-Americans off their property into internment camps, where they were forced to stay in cramped quarters and had subpar living conditions. This was a blatant violation of basic American rights, for nobody is allowed to be forced off personal property due to an accusation of disloyalty to the USA without any hard evidence. The Japanese-Americans that were deported were not given an equal chance of the “American Dream” because they were deported from their homes to internment camps and took away their chances at attaining a better life in the USA.

Despite this dark time in American history, the United States will always be a place where hard work can lead you to your American Dream. While the events that transpired during World War II were quite horrible, what led to the Japanese-American internment was a lapse in judgement of our society that enabled these events to occur. This tells us a society, we must never let something like that happen again, for we must keep the American Dream within reach for everyone.

Hello Sid! I enjoyed your piece. Did it feel as awkward to record this as it did to record yourself singing for Spanish class? This piece is very thought-provoking, and I think the cover image goes well with it. It truly shows all types of people trying to get to the American dream. Nice job!