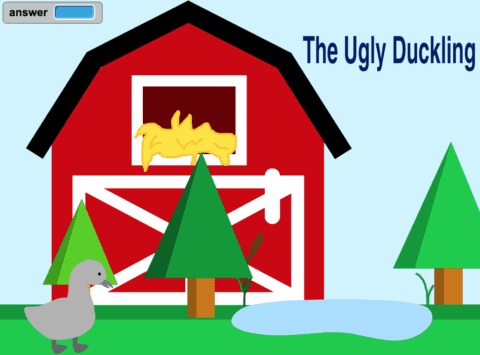 Do you like ducks going in adventures? Well, you’re in for a ride! My animation is based off the fairytale “The Ugly Duckling” by Hans Christian Andersen. The duckling is bullied his whole life for having gray feathers. All the farm animals refuse to play with him because of his looks. One day, when the duck is walking he is captured by an old woman greedy to receive eggs from him. The woman, her cat, and then hen make fun of the Ugly Duckling for not being able to do anything but be his ugly self. Later as the nights pass, he escapes and lives in the reed bushes for months. He matures into a beautiful swan and finds a new family who cares about him. My alternate ending is where the Ugly Duckling finds no escape and has to live with the torture of the old woman and the cat. He is then exposed for being a male and kicked out of his only shelter. He suffers in the harsh weather and slowly matures into a bird. When he talks with the other swans he is still rejected. Fed up with being looked down always, he decided to leave to the West and start a new life. I worked on writing the script and making changes in red to cut out parts and in blue to add any new changes. I used storyboards to plan out how the setting and the characters would look. Then I began programming on Scratch.

I linked this document, so readers can see my work process behind the animation.