Hello! Welcome to an introduction of my adapted animation, “The Two Goats”. This animation is adapted from one of Aesop’s fable’s and teaches a lesson about pride. In this animation, you’ll be introduced to Toto, David, and Abua. You’ll be able to choose an ending for my animation, so try it out! 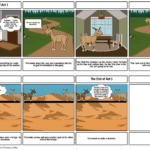 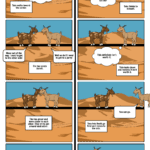