The Truth About Cambodia

Home The Truth About Cambodia 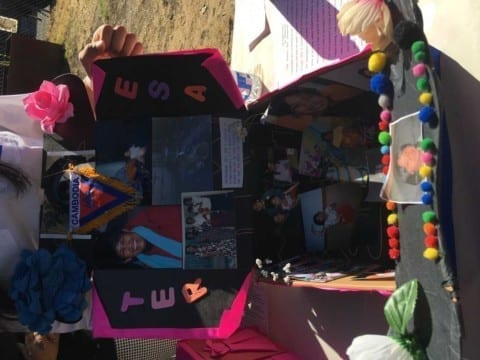 This Shadow Box represents my ethnicity of being Cambodian and my biological sex which is female. In this society females are seen as weak, voiceless, worthless, or not even good enough. This is considered a dominant narrative because they are stereotypes for females. On the side of my shadow box, I show a princess called Sleeping Beauty. Many princesses are rescued by a man and it’s always a happy ending. Society has told me in order to be happy, I have to depend on others. Boys or men are supposed to come and save the day. Instead of having a happy ending, I had a miserable ending. That is why on the other side of the box I have mirrors. The mirror represent that I felt ugly and disgusted with myself because I had let social media and others define me. The life I had was no longer mines but for society to judge me. Furthermore, inside of my shadow box, there are a lot of flowers and pom poms. This represents my counter narrative because my past has made me into a stronger and colorful woman. I didn’t let stereotypes control my life anymore. Another part of my box represents my culture which is Cambodian. Many people may assume that the only history of Cambodia is war. The dominant narrative represented on my box is that Cambodia is a very sad and a dangerous country because of what happened during 1975-1979. This was something that I wanted to hide because I felt ashamed and angry. As I grew older, being Cambodian is more than just war. When my box is opened you will see me dancing in traditional Cambodian clothes. My counter narrative shows that I want people to understand that my culture is beautiful and is flourishing. Also, I have a lot of pictures of my mom because she is like a warrior who is strong because she escaped a terrifying life in Cambodia, but manages to be very kind towards others.