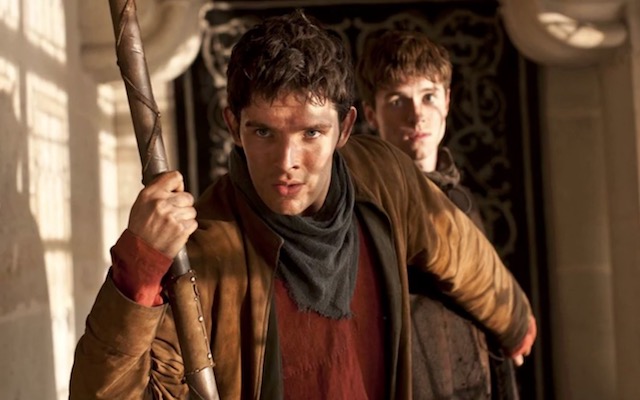 King Arthur was an amazing legend that many people still talk about today. A plethora of movies, books, and TV shows that revolve around him and his leadership have been made and watched by so many. A common trait seen in Arthur is his compassion for his subjects. He ruled fairly and fought to protect every last one of them. He would die to help his citizens, which made him incredibly honorable and noble. However, Arthur could not have been the famous and chivalrous King that he is known to be without the powerful sorcerer and friend, Merlin.

At the beginning of the show, Merlin, Merlin and Arthur are “enemies”. Their hatred for each other is seen specifically through their bickering. Arthur believes Merlin to be only a wimpy servant, while Merlin believes Arthur to be a perfect example of arrogant royalty (The Adventures of Merlin). However, after Merlin becomes Arthur’s main servant and helps give input in certain decisions, their bickering becomes more friendly. Arthur comes to trust Merlin with almost anything. They grow to have a friendship that not many servants and Kings have: a brotherhood. Although Merlin is not and could never have been a Knight, Merlin sits next to Arthur at the Round Table as one of Arthur’s most trusted advisors (Merlin).

Yes, Arthur has his brotherhood of knights, but Merlin went on all of Arthur’s quests (whether he was supposed to or not). This demonstrates that Arthur truly only trusts Merlin, as he was deceived in the past by those he loved. Arthur shares his plans with his wife Guinevere and his knights, but has been betrayed by all of them, except Merlin. Even the main enemy in the show, Morgana, states, “Arthur is nothing without Emrys ” (Merlin). Emrys is Merlin’s sorcerer name. Emrys is said to be the doom of Morgana because he has such pure and true power. Merlin always used his power to help, support, and protect Arthur on his adventures.

Because Merlin is the only person that Arthur could count on for all important decisions, Arthur could not have been such a great leader. Merlin helped shape Arthur into the legend people know today through his magic and brotherhood that the two created. Therefore, the compassionate and strong leader of Camelot, King Arthur, would be nonexistent without his right hand man, Merlin.

I am impressed by your post, “The True Power Source Behind King Arthur” Because yes indeed he was the great king we all know and love but without his faithful friend, Merlin. Merlin may have been his enemy but from what we saw it grew into what is most prized and cherished.  he was the person that King Arthur can rely on and trust,  they became close to one another and this is what I truly admire.
One sentence that you wrote that stood out to me the most is, “ Merlin helped shape Arthur into the legend people know today through his magic and brotherhood the two created.”I think this is very truthful as is Merlin and King Arthur didn’t get along,  what would have happened to the king we knew.  as well what would become of the king if they were to never know each other in the first place, would he have been the great king we knew?
I think you for this knowledgeable writing of yours, I look forward to seeing your next because you have enlightened me on how one person can help change another despite being enemies. Another thing is how you wrote and explain the facts about Merlin and King Arthur was very welcoming to read and learn about.