The Trauma of Separation

Home The Trauma of Separation 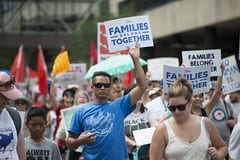 It is important because this has been a huge problem with today and that ICE is still getting undocumented immigrants.

As of August 2018, Over 2000 young immigrants have been separated from their families. Some of these families have been traumatized. “I felt like I could no longer take anymore. My soul was destroyed.”A family from Honduras came to the united states because where they were it fleeing with violence. They presented themselves on the Mcallen bridge  and that the mother was separated with one of her children that was under 5 years old. When they finally reunited, the mother was heartbroken that her son didn’t even know her. Not only the parents have been affected but the children also experienced trauma “There is no greater threat to a child’s emotional well-being than being separated from a primary caregiver…Even if it was for a short period, for a child, that’s an eternity,”Johanna Bick, a psychology professor who said this and this matters because as you seen a mother heartbroken to see that her own son did not know her. Also she is not the only one but many Mexican immigrant families had their kids separated from them. This is big to know that we can’t have these young children separated from their families. Significantly this professor is also referring to how these young children can be affected badly when they are separated from their families  It is necessary to take action when the government is separating children from their families. The person who can do so is the president, willing that he can stop this when he wants to.

There were some people protesting to not let this policy continue and the slogan they used was “Keep Families Together”.  Many families are reunited but not all of them.

I would solve this issue by having not to separate very young children from their families. One way we would do that is to force Donald Trump to change his mind about this policy

I think people should watch this video of a mother reuniting with her young son. The video shows a heartbreaking moment the son doesn’t recognize his mother. This was a hard video for me to see this young son was traumatized. It is important to see this video because many young immigrants were separated from their families and that there was nothing they could do. We should take action and having to protest Donald Trump’s policy and having politicians to support.

This project made me think about There There because some characters in the book and real-life immigrants are both experiencing trauma. This trauma is caused by being separated from loved ones. In There There, a character named Jacquie Red Feather had experienced trauma when she was young. First, she started drinking and became an alcoholic. Then, after the death of her daughter, she left her family in Oakland. From there she had experienced trauma again because she took time away from her grandsons.

There is a little similarity but mostly differences between Jacquie Red Feather and real-life undocumented immigrants. Jacquie made a choice to leave her family. However, immigrant families had to be separated from their children because of the American government. This is different than what Jacquie experienced because the immigrants had no choice. This project helped me understand Jacquie’s situation because the experience of losing your family can be traumatizing.