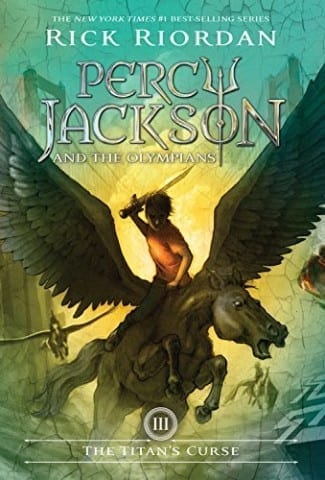 Recently, I read  The Titan’s Curse, by Rick Riordan.  I enjoyed reading this book. I liked reading this book because we get to meet two new characters Bianca and Nico. We also get to see the Hunters of Artemis. The protagonist is Percy Jackson. His story is set in specifically the military school, Westover Hall. The significance of the school setting is that they meet two new demigods, Nico and Bianca. The significance of the setting shifting from the school to Camp Half-Blood is that they can get quests and go on adventures. Percy faces certain forces and pressures. He has to follow the Hunters on the quest. He meets these forces and pressures by deciding to free a Pegasus named Black Jack and following them and trying to protect them. You can see this early in the book.

The tension rises when Bianca gets killed by a giant bronze guardian. This might leave a reader feeling nervous. This is because she got killed and Nico asked Percy to watch over her and now she is dead.

The book climaxes when Atlas is revealed and now Percy has to hold up the sky by himself. The falling action ultimately resolves the conflict. Artemis gets Atlas to hold up the sky again and Thalia throws Luke off the mountain. It’s a person v. person type of conflict that’s driving this story. This is because Percy has to fight opponents to win. Also Nico is revealed to be a son of Hades and he leaves Camp Half-Blood.

Interesting I remember reading these books when I was younger. Personally I liked the red pyramid series better (also by Riordan). What was your favorite book by Riordan?