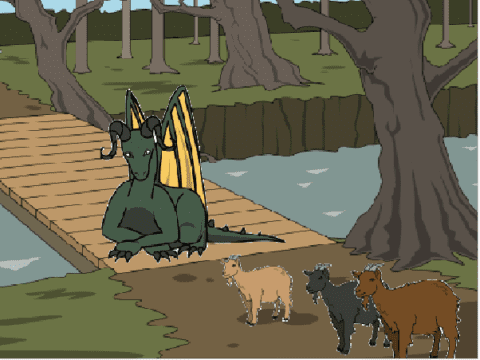 Hello, I would like to tell you about my remix of the famous fairy tale, “The three Billy Goats Gruff”. This was an assignment for technology where I had to go through a series of steps in order to make a final animation of an adaptation of a fairy tale. If you have not heard of this famous fairy tale, I will give a short summary. Basically, there were three goats, each of different size. They were starving as their land was deprived of any vegetation. So one day they decided to cross a bridge to get to land where there was plants and grass and they could eat before they starved to death. However, on the bridge was a hungry vicious troll. The first goats was clever enough to persuade the troll to let him go as he told the troll that the goat behind him was bigger and tastier. The second troll had done the same and the troll let him go as well. Then the third and biggest goat was brave and decided not to do the same as his brothers so he defeated the troll with his horns. However, I created an alternate ending to fit the assignment, where the goat had to decide to whether lie to the goat and say that his grandfather who was even larger would shortly be there, or just defeat the troll. If the goat decided to lie to the troll, when the goats would come back home and through the bridge, the troll would still be there but this time merciless where he would eat up all the goats.
To make this, I had to make a script of the two acts and the two endings. Then, I had to make a storyboard on storyboard that for both acts. Finally, I had to make the animation which took me quite a while on scratch.com.

https://docs.google.com/document/d/1LGl2Yyp5cjotglYytnWLQ_RjW9WBZk1eB7ZQceYKHeg/edit. This is my link to my script to show you one of the steps I took to plan out the final animation I made of “The Three Billy Goats Gruff”