The Story of Clive and Ollie

Home The Story of Clive and Ollie 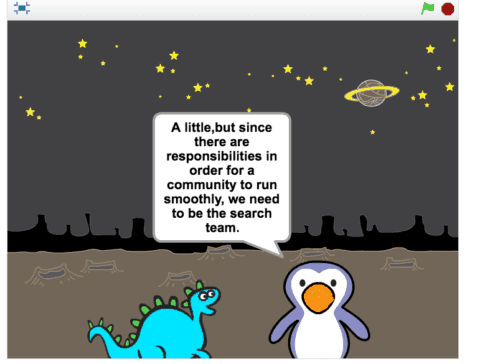 When I was asked to make this project, I wanted my characters to be completely random. So, I paired up a dinosaur and penguin. Then, I wanted this story to have a deep/dark meaning so I used the silly concept of them two searching for more surviving life on their destroyed planet.This is my script:

Act I: Clive and Ollie Meet

{The scene starts out with Ollie the dinosaur (who has a humble and innocent personality)and Clive the penguin (who has a relaxed mind and just focuses on the present instead of also thinking about the future) hiding from the destruction of their neighborhood caused by Shadow.}

{Both characters come out of hiding and walk toward each other}

Clive: Aren’t you one of Shadow’s soldiers?

Ollie: No, I’m just a child who lost his mom even before Shadow destroyed this place. I’m Ollie.

Ollie: Are YOU one of Shadow’s soldiers?!

Ollie: Why? Isn’t it obvious that we’re the only survivors of this tragedy?

Clive: A little but since there’s responsibilities in order for a community to run smoothly, we need to be the search team.

Clive: Okay, so you were right. There seems to be no one else but us.

Clive: Hell no! Plus, there aren’t any to give you anyway.

Ollie: Awwwwww. So, know what do we do?

Clive: We have to keep looking. There has to be more creatures that can help us rebuild this place.

{Clive thinks: Plus, I can’t hang out with this big innocent kid any longer. It’s driving me insane.}

{Characters get off the stage and Act I ends}

Act II: Clive and Ollie Search for Survivors on their destroyed planet

Clive: HERE WE ARE! Underwater!

Ollie:Whoa! How’d you do that?!

Clive: Did I forget to tell you? I’m magic.

Ollie: {gasp} Can you turn me into a dinosaur like one of Shadow’s soldiers?

Clive: Ummm… No, I can’t…uhhh… because… uhhh… I can’t turn someone into something they’re already are.

Clive: Can you not cry? Please?

Ollie: I can’t. It’s to sad to know that there’s no one left on this planet!

Clive: Uhhhh… We just have to keep looking.

{Setting changes to the inside of a castle}

Clive: HERE WE ARE! Somewhere I’ve never been to before!

Ollie: Before we start looking, I have one question.

Ollie: How were we able to breath under water?

Ollie: I thought your name was Clive.

Ollie: There is no one here, either.

Clive: Come on, Ollie, let’s go take a walk and look at the sky.

{Characters get off the stage and Act II ends}

Act III: The Dramatic Ending of Clive and Ollie (Not Really)

{Setting changes to the forest surrounding the castle}

{Scene I begins with both characters walking through the forest}

Ollie: So it’s official. There’s no one left but us.

Clive: I guess so.

Ollie: I miss my mom. I wonder where she is.

{Rustling is heard from a distance}

Ollie: What was that?!

Clive: I don’t know but I think it’s coming towards us.

Ollie: But what if it’s a survivor?

Clive: We just agreed there was no one left!

Ollie: So, we could disagree with ourselves.

Ollie: You too, Clive.

Ollie: Are we in heaven?

Clive: [sarcastically] I have no idea.

Resident: Hey guys we were wondering when Shadow would finally kill you.

Clive: I have no idea how to take that.

Ollie: If this is heaven, my mom could be around.

[Ollie’s Mom starts to move out of the crowd.]

Ollie: Mom, I missed you so much! This is my new friend, Clive.

Ollie’s Mom: Nice to meet you, Clive. I’m glad you two are here. Now we can really start rebuilding the city.

[Clive thinks: This is unbelievable]

Clive: Why have you guys waited for us all this time?

Ollie’s Mom: We don’t know where to start so we want everyone to have something they want for this city. The others have made me in charge and I want you guys to help me.

Ollie: YAY! We get to work as a family.

Clive: I don’t have a family.

Ollie: You could be part of ours.

With this script and how the animation is going to turn out in mind, I used scratch.mit.edu to make an animation of this story. (Making storyboards weren’t really part of my creative process, more like something annoying I was required to do)

By using the script, I finished The Story of Clive and Ollie.

Here is a link to my project: