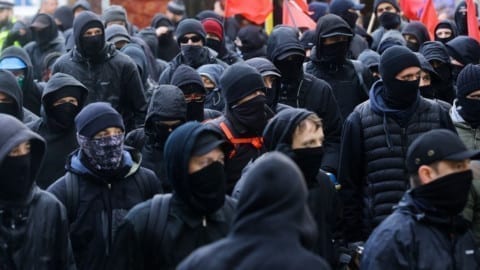 For those of us who wish to keep and protect every American’s First Amendment rights, there is an issue facing our country. The issue is how we have chosen to protest; to resist the things that we disagree with. It can no longer be blamed on one side or the other. Both sides (liberal and conservative) are to blame for violent actions that erupt in the midst of protests, marches, or gatherings. This can be seen in the recent Berkeley gatherings. Many of these protests, in which violence was used, come in the wake of the 2016 election. The main thing that people seem to resist are President Trump and the Right, or the Mainstream Media and the Left.

In these conflicts there seems to be a sense of panic. One side feels as though the other side would cause the end of the world if they have any political or social influence and vice versa. An example of this is when protesters at Berkeley attempted to stop a speaker representing the right from speaking at the university. The event escalated to the point of portable light poles being set on fire and bricks being thrown at people. This is a problem for three obvious reasons: People are getting hurt, property is being damaged, and some people are seeking to silence others.

First I would like to address the issue of people being hurt in the midst of the violence. It was Martin Luther King Jr. who said,

“Violence solves no social problems; it merely creates new and more complicated ones. . . . If . . . victims of oppression succumb to the temptation of using violence in the struggle for justice, unborn generations will live in a desolate night of bitterness, and their chief legacy will be an endless reign of chaos. . . . First, this [nonviolence] is not a method for cowards; it does resist. The nonviolent resister is just as strongly opposed to the evil against which he protests as is the person who uses violence. . . . A second point is that nonviolent resistance does not seek to defeat or humiliate the opponent, but to win his friendship and understanding. . . . The aftermath of nonviolence is the creation of the beloved community, while the aftermath of violence is tragic bitterness.”

We can take a substantial amount of knowledge from someone who has been through many protests and marches, and is renowned for his work to bring people together to create understanding, even if we disagree with his political or societal views. You may say that learning about Dr. King in school is a tired old way to teach children about civil rights issues, but I think it is too important not to teach, especially at the college level. We, as adults in America, need to act with more civility and nonviolent resistance.

The reason that Martin Luther King, Jr., gives for nonviolent resistance is “. . . the aftermath of violence is tragic bitterness.” If we give into the temptation of using violence as a means of resistance, then we create a situation that can easily be escalated to a point where nobody on either side is willing to reason with each other and create understanding.

Not only has violence been used to resist things that people disagree with, it is being used to silence the voices of those that they disagree with. The protests at Berkeley that I mentioned above is a prime example of how people were using violent action in an attempt to silence a speaker named Milo Yiannopoulos. This speech and the events surrounding it were the topic of a CNN opinion piece written by Jeffrey Herbst and Mitch Gelman. In this piece they say,

“But the protesters, whose actions led to the cancellation of his talk at Berkeley and elsewhere, have done a disservice to the First Amendment. . . . The fact that the violence at Berkeley caused windows to be broken at the Martin Luther King Jr. Student Union is a vivid and sad symbol of how much respect for the First Amendment has declined in the United States. . . . That a building named for the great orator has been vandalized to prevent speech should be an indication that we have a serious problem on some college campuses — and across the country. In a hyper politicized country, it may not matter to a protester, convinced of the absolute evil of Yiannopoulos, that violating the very precepts that allow their campuses to function — and to be the envy of the world — is wrong. . . . Indeed, President Trump was quick to tweet in favor of Yiannopoulos, while criticizing Berkeley. Perhaps it does not matter to the protesters, but they have created a situation where President Trump is a stronger proponent of the First Amendment than many who claim that he is a danger to society. As a result, they are hurting no one’s cause but their own. . . . It would be better to let Yiannopoulos speak, calmly explain why he should not be listened to, and watch as his fame dims. The power to starve him and those like him of the oxygen of outrage is far more powerful, and keeping with our foundational rights, than the stones thrown at Berkeley.”

I might not completely agree with their view of Mr. Yiannopoulos, but I whole-heartedly agree with them when they say that these protesters are doing a disservice to the First Amendment, the very amendment that gives them the right to protest. Not only are they doing a disservice to the First Amendment by stopping someone of an opposing viewpoint from speaking, but they had also taken to breaking the windows of the Martin Luther King Jr. Student Union Building. Herbst and Gelman sum that up perfectly by saying, “That a building named for the great orator has been vandalized to prevent speech should be an indication that we have a serious problem on some college campuses — and across the country.” This is not a mature way of responding to an opposing argument. Universities should allow people with opposing or even controversial views to speak, and we should at least listen because it creates understanding which makes having a reasonable dialogue possible.

As we reflect on Dr. King’s words reminding us that, “Violence solves no social problems.”  Does it seem like today’s protesters respect or follow his philosophy anymore? I for one don’t think that protesters who take violent action against people and property know what kind of damage they are doing. We must return to peaceful, nonviolent resistance in order to maintain a healthy democracy. We are not making progress when we destroy property and keep people from speaking, we are regressing into a dark age of anger and silence. Let’s keep free speech free, and create dialogue rather than destruction.