The sorrow of Macbeth

Home The sorrow of Macbeth 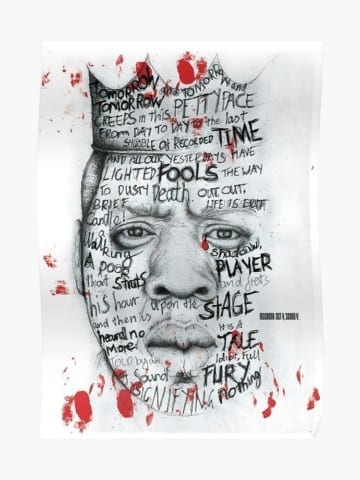 Youth Voices
The sorrow of Macbeth

For my monologue project, I selected lines from one of the saddest scenes from Shakespeare’s play, “The Tragedy of Macbeth”. I chose to learn Act 5, Scene 5, lines 20-31 as my monologue since I think it is one of the most sorrowful monologues regarding that lady Macbeth dies and Macbeth receives the message.

The monologue consists of Macbeth and Seyton, Seyton is speaking to Macbeth about lady Macbeth’s death. Seyton says, “The Queen, my lord, is dead”(line 19). This monologue is heard by Macbeth. Seyton tells Macbeth in private only both of them are speaking and there isn’t anyone there who is overhearing things. The monologue takes place in Macbeth’s castle where Macbeth lives and where the king sits after Lady Macbeth manipulated Macbeth to kill Duncan to be able to live in this castle and made lady Macbeth feel guilty of what she made Macbeth do. The main conflict in this scene would most likely be Macbeth reacting to the death of lady Macbeth and receiving the news. I say this because of how Macbeth reacts he says, “She should have died hereafter;”(line 20) like saying that she shouldn’t have died there but over here. Macbeth at the beginning was weak and not “manly” but throughout the story, he became tougher and is able to make his own decisions. Macbeth starts to feel sorrow for what lady Macbeth has done. This is part of a pattern for Macbeth where starts to lose everything he has loved and had. Over time this builds up to be the main conflict in the story of Macbeth.

The character speaking in this scene, Macbeth is quite a strong character. This is because when Macbeth kills Duncan, he becomes more “manly” and indestructible. This seems different from his previous state of mind. In the monologue, words like “Tomorrow and tomorrow and tomorrow”, reflect that Macbeth thinks that every day is the same and that things will never change, which shows that Macbeth is tired of having to go through the same days every day. The words “There would have been a time for such a word” represents the feeling of sorrow that Macbeth is experiencing after he is told about lady Macbeth’s death contributing to his overall mental state because everything that he has ever wanted he has except for his wife.

If it was up to me to stage this scene, I would most likely make the actors playing Macbeth in his room in order to set the mood of sadness because before he would be in the room with lady Macbeth but now that she is dead he will be alone in such a big room. This might represent Macbeth‘s feelings of sorrow after he realizes that lady Macbeth has died. If I were to direct the actors, then I would most likely encourage Macbeth to behave his shoulders down, and give off a feeling of being sad in an effort to make his character believable. I would do this because then if his shoulders are down then it shows how he has lost strength and how the death of lady Macbeth has affected him.

In this monologue, Shakespeare used certain poetic elements to enhance the emotion being portrayed in the scene. As I mentioned before, the main theme in this scene would be the sadness and the use of poetic elements really reinforces the impact of Macbeth‘s emotions. For example, Shakespeare used repetition as a feature in his writing to provide sorrow and sadness. This example was used before and the quote is “Tomorrow, and tomorrow, and tomorrow”, the use of repetition caused like an infinite mood, it doesn’t make sense but by repeating “tomorrow” he is feeling like everything is the same.

All in all, the monologue in Act 5, Scene 5 is a prime example of an effective piece of writing by Shakespeare that this monologue was the falling action of the story because Macbeth now has to deal with the death of lady Macbeth. Right after this, he is informed that the trees are moving and then he goes to war. So with the thought of lady Macbeth being dead, it could affect him in the battlefield.