The Safety of America

Home The Safety of America 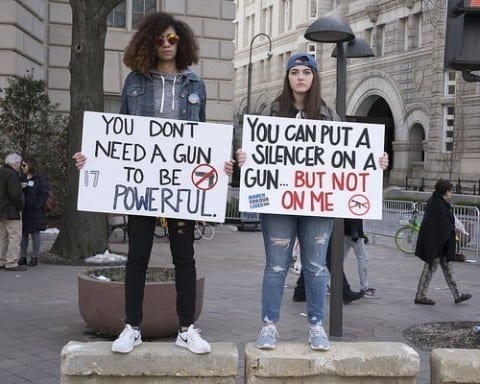 The controversy over Gun Control in the United States has been a very big issue, especially in recent years. The people most affected by this problem are students from different schools, because the increase in school shootings has targeted this group of the population. Even though this debate goes as far back as the U.S. Constitution, the distinction between the two opposing sides has slowly become more and more evident as people advocate for more changes to Gun Control. Everyone hopes that the politicians behind this issue will come to a compromise that best ensures the safety of America.

Through the articles I read, I was better able to understand the perspective that different people have on Gun Control. For example, Emma González is a survivor of the Parkland Florida school shooting, and in an article she shared why it is so important for students to voice their opinions on this topic. I learned that once one student begins to speak out, it has a domino affect and many people begin to follow. Through these strong actions, González believes that there will definitely be a change in the future.

I also learned from these articles that this issue goes very far back, but the separation between both sides of the argument has become more and more distinct in recent years. The differences begin with those who interpret the second amendment as saying that there should be more regulation of firearms, and those who interpret it as saying that these restrictions infringe our individual liberties. Despite this controversy, It’s important to realize that this is still, however, a growing issue in the history of the United States, as more and more people are purchasing guns as a means of protection. I also learned that due to this sparked debate on gun control, more politicians are analyzing ways in which they can ensure the safety of the United States and its people.

Photo by Mobilus In Mobili

Yulisa, Thank you for sharing this article with us I think what you wrote was very eloquently put. I loved how you didn’t really base your writing off the political side of this issue like many other writers show. Your main idea shows how the voices of our youth can change the world and I think that is a very impactful thing. I really loved when you said “Through these strong actions, González believes that there will definitely be a change in the future.” This shows that one drop in the water can have a ripple effect. If you were to expand on this idea I think that you should use this resource, https://scholars.wlu.ca/cgi/viewcontent.cgi?referer=https://www.google.com/&httpsredir=1&article=3040&context=etd. Overall I loved your writing and if you were to expand on this idea even more I would love to read it. Thanks, Ruby