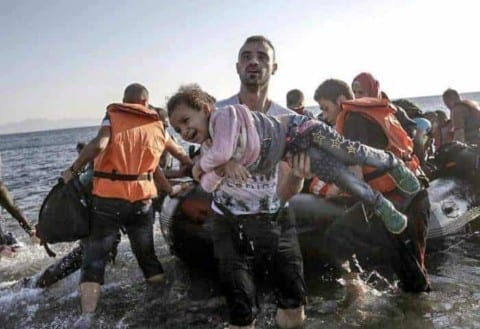 “We hold these Truths to be self evident that all Men are created equal, that they are endowed by their creator with certain unalienable Rights, that among these are Life, Liberty, and the Pursuit of Happiness” (Declaration of Independence). All Americans should know these resounding words. Written into history by a founding population of people who came to this land looking for opportunity, freedom, and salvation. Our very country was shaped and inspired by the message that no man was born to be oppressed, and everyone deserves a chance for a better life. America is not entirely white and not entirely native. We are united in the fact that most of our ancestors came to this country in order to pursue those inalienable rights of Life, Liberty, and Happiness.

Today, our country faces a very real breakdown and confrontation of these values. The refugee crisis has drastically affected the world around us as well as being an important point of debate and controversy in our nation. Migrants from Syria, Afghanistan, Kosovo, and other war torn countries are fleeing their countries in thousands to seek asylum. In fact, worldwide over 21 million people have been forced to leave their homes and seek refuge abroad (8 Ways to Solve the Refugee Crisis). They run away from war and loss, in Syria alone over a quarter of a million people have already been killed in the brutal Civil War and conflicts with the extremist group ISIS (What’s Happening in Syria). These people are not only leaving everything they know behind, but also risking their lives and their family’s lives in a desperate attempt to reach safety. According to the National Organization for Migration, over 3,770 migrants have died trying to cross the Mediterranean sea in 2015 alone (Migrant Crisis: Migration to Europe Explained in Seven Charts). While we sit by and do nothing hundreds more men, women, and children die a month.

Knowing these facts, it saddens and worries me to see the growing opposition against the acceptance of these people in need. As of recently, the Obama administration had raised the number of refugees America will take in, for the next year, to 110,000 (Arbieter). Sadly, many Congressmen and other groups are vocally against this, wishing instead to bar all immigration into the United States. They defend their words with the fear of terrorism and retaliation a massive influx of middle east immigrants brings, saying we may be letting terrorists and extremists infiltrate our country. Against their words however is the evidence. Since 2001, over 800,000 refugees have found the U.S. as their home yet none of them have been found to have committed any act of domestic terrorism (Arbieter).

Refugees are people the same as you and me. They are people fleeing horrible situations in order to rightfully obtain Life, Liberty, and the Pursuit of Happiness. Turning them away goes against the fundamental ideas our country was based upon, and condemns them to even more suffering. Instead of banning migrants, we need to accept them and open our doors wider. We need to help open up safe routes to save the lives of so many dying on torturous journey’s, and establish resettlement programs to help torture survivors, those in need of medical aid, and those who have unseen scars of horrors we cannot imagine. As the next President, it’s your responsibility to put these plans into action. Do not let extremist groups such as ISIS control us out of fear, but instead let their actions inspire generosity and kindness.  Do not turn your back on a population of people who have lost everything and have no where to go, but instead show them our true american values.

I think you have a well thought out argument. I agree with you that we were founded on immigration. My question to you is how long will we able to sustain our immigrants?

Carmen,I think your view on this topic is very well thought out and passionate and I love that! You gathered very valuable and controversy evidence. The refugee topic is very touchy and many people either feel very strongly that we should help them and others feel that we should close our doors. What you said about america and us and what we’ve stood for since the beginning is very true. We are a superpower of the world and instead of cowering in fear of isis we should stand up for what our founding fathers believed in and show generosity instead of being scared. Overall you discussed and supported this topic very well..