The Reality of Immigrating to America

Home The Reality of Immigrating to America 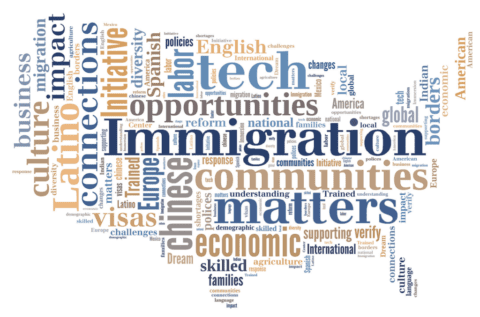 America is seen as a place where abundant freedoms and opportunities are waiting. However, until you experience it firsthand, you can not predict how your dream will play out. America is a place where dreams come true, but American freedoms don’t come without cost, You must work hard for what you want because nothing in life will be handed to you.

In Ibi Zoboi’s book American Street, the main character, Fabiola, moves from Haiti to Detroit with her mom for un belle vie, which is Creole for a good life. However, her mother is taken to a detention center in New Jersey, and Fabiola is forced to go to Detroit and start her new life alone. She stays with her aunt and three cousins in a house on the corner of Joy Road and American Street. Her Uncle Philippe said he wanted to buy it because ,”He thought he was buying American Joy” (Zoboi 57). However, he would find out “Death parked itself on that corner” (Zoboi 219) not only him for but every previous owner of the house. What she expected was her vision of the American dream, a free and joy-filled life. She quickly came to understand that her reality had nothing to do with her dream. The lives of her family, the author’s family, and many other immigrant families are often unpredictable and disappointing, compared to their high expectations. While they may have the same opportunities as others who live in America, those opportunities aren’t equal. They have more challenges they have to overcome such as language barriers, poverty, and different values and cultures than they were raised with. When they come up with their American dreams, these hardships are not factored in. This is partly because you never truly know exactly what will happen and, unfortunately, they don’t know to prepare for the worst, but only to hope for the best.

Although the book is fiction, it is based on many immigrants’ reality. In Sara Fowler’s article “Immigrant: Life in America Challenge,” Anoosh Mokhtarian dreamt of living in America from the age of ten. Since getting a visa to come to America is so difficult, when his name was chosen from the visa lottery, he knew he had to take the opportunity, even though it meant leaving all his family and friends. However, adjusting to American ways was harder than he had anticipated and he found himself in “culture shock.” Even with his many advanced degrees, he ended up working as a cashier at Kroger just to pay his bills. Immigrants have to re-learn everything. For the most part, they have to start over, “You feel like a 4- or  5-year-old. You’ve got to learn English, you’ve got to learn how to talk to people, the new culture” (Fowler). Overall, once you get past the unrealistic high expectations you imagine, you can form your new reality and strive for that. To paraphrase Mokhtarian (Fowler), in America you’re able to express yourself more than in other countries. You can use the freedoms given to you in the Constitution and opportunities to achieve whatever goal you set for yourself, and that becomes your realistic and possible American dream.

While the transition isn’t easy, not everyone has as difficult an experience as Fabiola. In Alan Montecillo’s article “5 Ways to Adjust to American Culture,” he recommends “Try the local foods”; “Familiarize yourself with American Media”; “Force yourself to make small talk”; “Share your life experiences, but keep an open mind”; and “Explore and try new things.” Although this wouldn’t have helped getting Fabiola’s mother free, they’re good suggestions for adapting to a new place, ”Once I realized that it was going to take some active cultural adjustment, life got a lot easier” (Montecillo). Montecillo was a third-culture kid, born in America but not raised here, but he discovered that being an American citizen by birth does not mean you’re American by nature. You become familiar with the culture you’re raised in, no matter where your citizenship is. The sooner you can learn to adapt to the local culture, the sooner you can focus on achieving your American dream.

Most Immigrants come to America with a hope for an easier life than they left behind. But often they fail to realize all the obstacles that can throw their dreams off course. Learning to live in the new culture, and then accepting the freedoms and opportunities given to you,  you can go after making your American dream your new and improved American reality.

Sara,
I really liked what you had to say about immigration because it is true. I see what immigrants have to go through, and I don’t think I could ever understand because I was born here, but I can empathize, which is something we should all do. My grandma and father were immigrants, and I have seen their hard work and determination to work to provide for us. Immigrants are truly the most hard-working people I know, because as you said, they have some equal opportunity, however it is harder to achieve that. They almost have to relearn everything. I like that you cited many articles and a book, even though it was fictional, yet relatable. It also gave me the idea to start reading that book!

I enjoyed reading this; since i come from an immigrant family I could relate to this very deeply. I would hear stories about what my parents thought America would be like but when they got here it was completely different. What you said about how life is really hard for immigrants and that they have to overcome a lot of obstacles is very true. In https://www.globalcitizen.org/en/content/the-7-biggest-challenges-facing-refugees-and-immig/ it talks about the 7 hardest thing immigrants have to over come and it amazes me what people go through to get their families a better life. Great read!