“The Rain Forest of the Ocean”

Home “The Rain Forest of the Ocean” 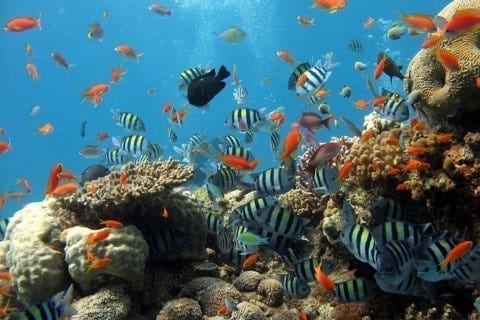 Only forty years ago coral reefs were thriving all across the globe. Reefs were illuminated by vibrant corals living in a symbiotic relationship with hundreds of thousands of fish species and other marine organisms. Recently this is not the case. In 1987 one of the earliest cases of serious bleaching was recorded, and since then the death rate of corals has exploded. Bleaching is when corals expel the algae living in their tissues, which results in the coral turning all white and in most cases dying. Bleaching has been around since the beginning, corals can bleach as a result of stress, low tide, fresh water flooding, pollution, and high water temperatures. It’s a natural event, however the bleaching recorded in 1987 was worse than scientists had ever seen. Not long after that, similar observations began showing up across the globe. As of right now we are responsible for the destruction of 5-10% of coral reefs, and scientists predict that if we continue at this rate, 60% of our planets coral reefs will be dead within 40 years.

Reefs have been called the “tropical rainforests of the ocean” because they act as an ecosystem supporting just over a quarter of marine species. The only other ecosystem on this planet that has more is the tropical rainforest. Not only do reefs provide shelter for a huge number of marine organisms, they also contribute to a number of things that we rely on. For example, coral reefs act as a natural barrier from the harsh waves of the ocean. They protect a huge amount of coastlines from serious erosion, and they also are responsible for beautiful white sand beaches and bright blue lagoons that promote tourism, and industry that brings in over 7 billion dollars a year. Apart from that reefs act as “saltwater supermarkets”. 90% of pacific islanders protein is from reefs, and an overwhelming majority of Asia’s diet comes from coral reefs. Reefs provide just over 20% of all the fish caught in the ocean. This becomes a huge problem because every organism in a reef is dependent on another, so as parts of a reef begin to die, this dominoes and results in a much larger population of the reef dying.

The effects we are having on coral are undeniable at this point. The largest and most famous reef in the world is showing signs of deterioration and proving to be a huge problem for Australia. The Great Barrier Reef, a reef visible from the moon, and over 500 thousand years old has been showing serious signs of deterioration. Professor Malcolm McCulloch says that protecting the barrier reef is going to be a serious challenge, but it is necessary that something be done. This is the largest reef in the world, home to a huge biodiverse population of organisms and corals. The deterioration of this reef will not only contribute to the death of millions of organisms, but it will also show that we need to do something about this problem.

Chris, this is a very interesting post. I love the vivid descriptions and information about the reefs; it’s something I have never really put much of my thought into. This piece helped me learn about reefs so much more than I already knew about this topic. I did not know that they are deteriorating. I’d love to hear more about this topic and what we can do to prevent this deterioration of the “rainforest of the ocean” and instead help it grow. Great segment of writing and a very interesting topic!