The Process of the Making: I’m Proud

Home The Process of the Making: I’m Proud 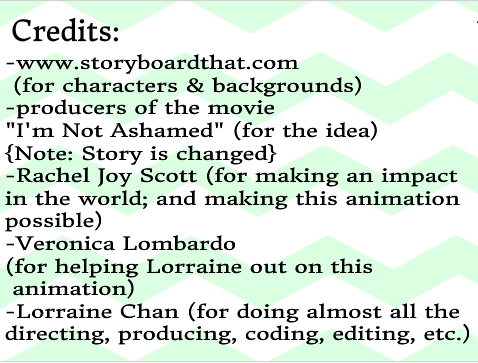 Rebecca Jane Scoot was an ordinary teenager that was inspired by her cousin to live her life for Jesus. Ever since then, her life became harder but it was worth it. Although many judged her for her weird actions of believing god, she didn’t care. My story starts off with Rebecca in her room .,land changes into her shirt for the day while listening to the radio, it is April 20, 1999 and this was the day of the Columbine massacre, where Rebecca sadly passed away taking a bullet on the arm and one in the head. She turns the radio off after the newsman says that 110 years ago, Adolf Hitler was born. Her mom yells that she would be late, so she tells her mother that she loves her and leaves. Rebecca then drives her brother, Christopher Scoot, and herself to school at Columbine High School. Christopher was a part of the “gang” with all the worst bullies, who all wore a white hat. This is when Rebecca asks him why he wears it and is that who he wanted to be known for. Christopher couldn’t take it anymore and said “Later, lamo” which were his last words to her before she died in the massacre. She later realizes that living a life for Jesus is hard, but by having one person stand out of their way, Rebecca herself, and show compassion, it could start a chain reaction, Mrs. Diaz, the drama teacher, was very helpful during the process of thinking through who she really was.

My story was inspired by a real girl named Rachel Joy Scott who actually died during the Columbine Massacre, producers created a movie about Rachel J. Scott called “I’m Not Ashamed” in 2016. The process of making this animation on Scratch was not easy and took quite a long time to make starting scratch. This process took about a month to make, making the script, comic strips from Storyboard That, and finally making the animation itself. This was not a hard process, it just took quite some time and it took a lot of thought to make it. The concept of this story came from a movie that came out in 2016 called “I’m Not Ashamed that was about a real life girl who died in the Columbine High School shooting/massacre, Rachel J. Scott. Many things are changed throughout the animation and credits were given for the idea. The script took about a week to make, and the ideas may have been taken from the movie, however, the script did not follow how they were in the movie. The storyboards did help with how I would see how the Scratch animation would turn out. The animation probably took the longest time, since all the inserting boxes, copying and pasting scripts, but after all this it was worth it, since it looked AMAZING!