The Problems That Teens Face With Social Media

Home The Problems That Teens Face With Social Media 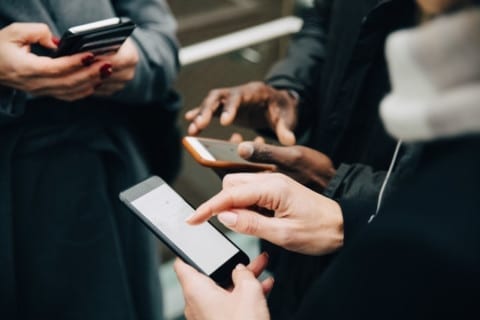 Social media has a large impact on teens today as the use of technology is more prominent than ever. According to Common Sense Media, teenagers spend an average of 7 hours and 22 minutes on their phones daily for nonacademic purposes. Teenagers spend a large amount of this time on social media. Although social media may seem harmless, it has many negative effects on the health of many teenagers. Numerous studies have shown that prolonged use of social media is associated with mental health issues such as stress, anxiety, and depression (Hou et al. 2). Mental health issues are serious as they can impact an individual’s long-term well-being. In addition to being harmful to the mental health of teenagers, social media addictions can contribute to lower self-esteem which leads to a decrease in academic performance (Hou et al. 3). Students may not be able to do as well in school which can greatly impact their futures. Students become frustrated when they give their best effort in school and do not get the results that they desire. Due to this, their mental health is even more likely to suffer.

Today’s teenagers recognize that social media is harmful to their well-being. When speaking about the issues that social media causes, one girl claims, “‘It makes it harder for people to socialize in real life, because they become accustomed to not interacting with people in person’ (Girl, age 15)” (Anderson and Jiang 7). In her personal experience, she says that it is harder for people to socialize in person because they are more accustomed to doing so online. This is problematic because good communication and social skills are essential in life, and the use of social media is impeding on the opportunity to develop those skills. Another teenage girl claims that, “‘It provides a fake image of someone’s life. It sometimes makes me feel that their life is perfect when it is not’ (Girl, age 15)” (Anderson and Jiang 7). Many teenagers often post on social media trying to look their best in search of validation. As a consequence, others compare themselves to edited and fake pictures and begin to feel bad about their own lives. Another issue presented by a teenage boy is, “‘[Teens] would rather go scrolling on their phones instead of doing their homework, and it’s so easy to do so. It’s just a huge distraction’ (Boy, age 17)” (Anderson and Jiang 7-8). The seventeen-year-old boy gives insight into his personal experience with social media as he claims that is a major distraction in teens’ lives. Teenagers miss out on time to study or time to socialize with others in person because they are addicted to technology and social media.

The problems that teenagers face due to the effects of social media are unlikely to stop in the near future. In 2015, a research study found that 92 percent of U.S. teenagers spend time online daily with the majority using multiple social media sites (Engeln 174). Social media companies want as many users as they can get in order to be more successful. Because they are gaining so many users, it is unlikely that the popularity of these sites will decrease. As long as teenagers are addicted to using social media sites, the detrimental effects that they receive from constantly using social media will not diminish. They will become further submerged into the world of instant and colorful feedback, and it will only become increasingly difficult for them to liberate themselves. If society does not make an effort to prevent the problems that social media causes, the problems will only worsen.

I loved this article!! I like how you touched on different ways social media impacts our life instead of just saying that it does. Using the girls’ views and comments to support you idea really shows that people all around agree that social media is not all that amazing 🙂