The Power of Language in Music

Home The Power of Language in Music 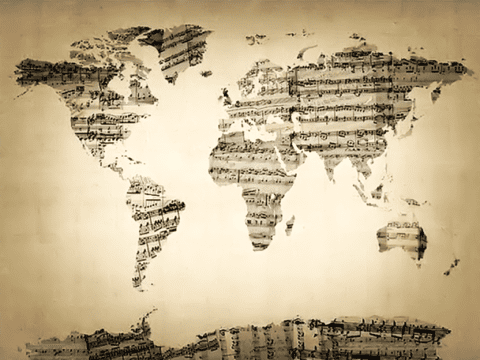 Music has become such a common occurrence in our daily lives. Whether it be on your car radio, from your school’s orchestra, or just inside a local restaurant, music is everywhere, yet it may sometimes come to a point where it becomes so ordinary, it is not likely that one will properly acknowledge the influence it has and the unity it brings. The melody, lyrics, and meaning of a song can affect our emotions, bring awareness to critical topics, and can unite a diverse group of people with a common goal or nature. Music is so much more than notes on a page, it is a language that unifies the world through rhythm and energy, despite any deep demographic or cultural differences.

Everyday, popular music tends to be overlooked, or it can even hide some questionable lyrics in between some captivating rhythms and melodies. Most people do not take the time to listen closely to what the artist is saying. When describing the breakdown of songs such as “Blurred Lines” by Robin Thicke, the author states that “we should all be critical consumers of the media…And awareness is the first step toward solving problems” (Martinez). In this specific song, Thicke uses derogatory terms and phrases against women or any victim of sexual assault, which demonstrates that catchy pop songs such as Thicke’s can contain dark underlying meanings. However, those who advocate for sexual assault use this song as somewhat of a unifier, as it spreads awareness and breaks the stigma about speaking out against assault. Music, if listened to intently, can be used to build up empathy and introduce different perspectives on certain issues. These lyrical messages, once discerned properly, can reveal deep truths and touch many hearts.

Music is a powerful tool that offers moments of contemplation and affects our emotions, which can connect people of different lifestyles. Music is an influential part of people’s lives and can make one feel “entirely caught up in [the] energy, in the overwhelming intensity” (“The Power Of Music (Even When You Don’t Know The Words)”). As stated in the previous paragraph, music can be utilized to spread a message. It can also be used to reflect on one’s inner thoughts and how to better themselves. Music is a way to express emotions, therefore, it is quite easy to convey complex feelings through the diction of a language or song. Using the power and tone of music, it is proven to be universal, connecting different individuals through passion and sentiment. The universality of music acts as a force of unity, bringing people together under one nature.

The complexity of music is vital in spreading certain messages, affects our deepest passions, and ultimately unites the world despite the vastness of diverse cultures. In popular music today (and in all music genres), it is important to listen intently to the lyrics of a song, which may offer a deeper understanding for different topics. Music in general provides a way to convey emotions, which in turn connects individuals through a common feeling, whether it be happiness, sorrow, or resentment. Music allows the listener to become more aware about complex issues in the world today and lets them express who they are or how they truly feel about certain individuals or circumstances. Music in itself is a powerful language that changes lives and transforms one’s world into a bigger and sometimes brighter place.

Martinez, Kristen. “The Power of Language in Popular Music.” Pacific NorthWell, 5 May 2015, pacificnorthwell.com/power-language-popular-music/.

“The Power Of Music (Even When You Don’t Know The Words).” Wandering Earl, 22 July 2016, www.wanderingearl.com/the-power-of-music-even-when-you-dont-know-the-words/.

Jessica I found your post to be a fun one sense i do like to listen to music when i get the time too. A quote that I Liked from your post is that Music in itself is a powerful language that changes lives and transforms one’s world into a bigger and sometimes brighter place. I agree with what you have said in this post here is a link to help you with more of the infromation: https://www.nytimes.com/section/arts/ this article is about the diffrent types od music that is out there. thank you foe writing this post it was a good one to read Iook foward to seeing what you write next because you did a good job on this post.

Dear Jessica,
I am strongly intrigued by your post “The Power of Language in Music” because when it comes to song lyrics I associate myself with most of them. They also bring great meaning to my life that other things don’t. One sentence you wrote that stands out for me is: “Music is a powerful tool that offers moments of contemplation and affects our emotions, which can connect people of different lifestyles”. I think this is important because it shows how everyone can be connected through music.
Thanks for your writing. I look forward to seeing what you write next because the way you write about a topic really caught my attention.
Ashley

Dear Jessica,
I am intrigued by your post because the title really stands out. I also feel like Music portrays an important role of life.
One thing you said that stands out for me is: “ These lyrical messages, once discerned properly, can reveal deep truths and touch many hearts.” I think this is true because many songs have amazing lyrics but many people don’t pay attention to them.
Your post reminds me of me. I always like to listen to music and I like getting requests to songs to listen to me. Something I like to look for is the instrumental and I like to look at the lyrics closer since it makes the song sound different.
Thanks for your project. I look forward to seeing what you write next because the research you do seems very interesting. Hope you had a pleasure researching this since I enjoyed reading it.

This was very interesting to think about. Your example of Blurred Lines reminds me of Outkast’s “Hey Ya”, specifically the lyric “Hey ya! (y’all don’t want to here me, ya just want to dance) Hey ya!”. the lyric is talking about how people will just dance to Andre’s song even though it’s really sad. Good article.

Dear Jessica, I am interested in your post “The Power of Language in Music” because I sometimes don’t even listen to the words of a song. I agree that music is a way of how people communicate how they feel. One sentence that you wrote that stands out for me is “n this specific song, Thicke uses derogatory terms and phrases against women or any victim of sexual assault, which demonstrates that catchy pop songs such as Thicke’s can contain dark underlying meanings.” When I hear this song I never knew it was about that. I always thought it was just a song you dance to. Thanks for your writing. I look forward to seeing what you write next because I was really interested in the topic.