The Power of Language: An Exploration of Literature

Home The Power of Language: An Exploration of Literature 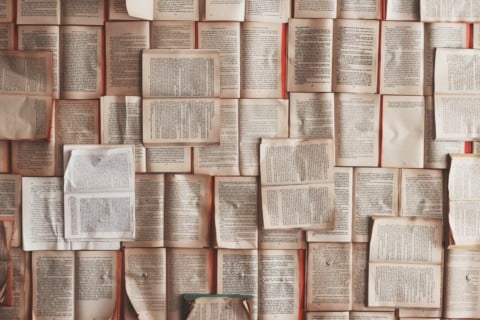 It is in language, the ink blotted on a page, the deep rasp of spoken word, or even the swift movement of a hand, that we, as humans, connect to the world around us. Language is a reflection of our lives, and it feeds into our very beings, wielding the power to change the thoughts, feelings, and perspectives held within others. This change can be minuscule, as simple as replacing a word for another, yet those specific words used can alter the feelings associated with it and make an idea feel resolute, or in some cases even hollow. The words and phrases we use have the power to influence people, playing a role in how we perceive and interact with others—communication essentially—and one way this idea is conveyed is through literature.

The weight of words is demonstrated throughout not only the physical books themselves, but also the themes bound within. In the dystopian novel, Fahrenheit 451, a story in which books are outlawed, as they encourage human intellect and communication, the power of language in literature is depicted. When Montag, the main protagonist, says, “There must be something in books, things we can’t imagine,” he is depicting the value of words, an indication of the significance of literature, and in turn, language (Bradbury 48). The written, arranged words within literature convey a message to the readers, forming connections and inciting emotions between each and every line. As shown through the broken dystopian society, their reluctance to allow literary language, due to the fact that it is a way to communicate and incite intellectual learning, emphasizes this.

It is through literature that this weight of language is heightened, as well as through countless other forms. Language in literature builds the foundation for communication around the world, invoking varying perspectives and ways of interacting with certain topics. Worldwide, people speak “roughly 7,000 languages,” a representation of the many varying languages and the universal nature of language itself (Shashkevich). This widespread makeup of language “binds us together across those from distant lands” and is like no other (Woofter). Not only does reading open our minds and the door to communication, it invites a carefully woven sense of purpose and direction between humans. Words are the threads of humanity itself, and without language, especially literary language, we would lose the tool to build bridges between different people, cultures, and ideas.

Hi Madison! I just have to say that i love your writing. The imagery and movement of it is just so lovely to read and i really enjoyed it. I agree with all of your points, and while it was small, the observation that changing just one word can change everything is just the perfect way to express how powerful language can be. I also love the inclusion of Fahrenheit 451, which I hadn’t even thought of, who’s whole purpose is showing that language is so powerful that people who cant control it will do anything to Stop it. I really enjoyed this piece. It really made me think. Can wait to read what you write in the future!