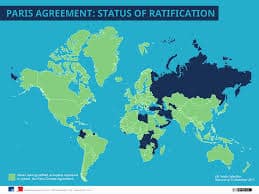 Our climate is changing at such a rate that plants and animals of this world are not able to keep up. They are starting to die because habitable areas they used to thrive in are becoming extremely different and harsher. This is killing biodiversity and putting humanity at risk for more diseases that will kill all our plants at once. Like the Irish potato famine but on a world scale. Most of the world’s leaders came together to create the Paris Agreement to hold companies to a higher standard in order to clean up some of the air pollution that is such a factor in rising temperatures.

The first article I read expressed the huge decision Trump made near the beginning of his presidency. To pull the US out of the Paris Agreement. He believes that if the US stayed in the Paris Agreement forcing companies to clean up their production of bad chemicals, they would not be competitive anymore and production would move to China. Once again the leaders of our country have put money before the world’s health. And all this political decisions are funded by oil. The Koch brothers are billionaires who are able to buy votes, because if the Paris Agreement went into action they would lose hundreds of millions of dollars.

The second article is aggressively against Trump. The author describes a world, that if Trump continues what he is doing will occur, void of life. The author believes that Trump should be impeached for any number of violations against the Constitution. But specifically he should be tried by an international court for crimes against humanity for trying to pull out the US from the Paris Agreement and creating new laws to take away restrictions which protect our environment as we know it.

Great job Elliot. I like the fact that you were concise with your points and got the issue your writing about across to the reader. I believe that if you add direct quotes and additional evidence to support your claims, your writing will be more reliable. This is article at the bottom might be helpful for your writing.

Hey Elliot, I like your points you brought up about how we shouldn’t mess with the planet because of the repercussions it could have on humanity. According to CFR the main reason Trump pulled out of the agreement was to stimulate the US economy (Despite this not being a good option)

My main problem with your article is how it is written. There are a lot of run-on sentences, as well as some things that don’t make sense. There also weren’t any links to your sources. Overall, you had the right idea, but it could have been brought out a bit better.