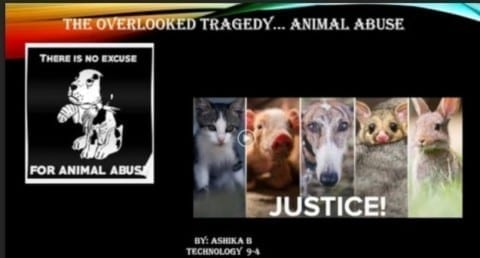 The issue is animal abuse. I am passionate about this issue because it is usually overlooked. Most people don’t consider this problem as important as other social conflicts. I believe that the same amount of action that is being taken to prevent other issues that involve human lives should used to prevent this tragedy. This is because the lives of animals is equally as important as the lives of humans.

Before I started this project, I knew that the victims are the animals that are being abused by their owners. They are innocent animals that probably have done nothing to harm their owners. However they are still being punished and hurt for no reason. They are at a disadvantage because they are unable to fight for themselves or get help from a person who cares. I also knew that the culprits are the people who are abusing the pets without anybody noticing. Now I know that there are so many different ways in which animals can be secretly harmed by humans. Most of these ways are unreasonable and unnecessary. I also found out that most people who abuse their pets or any animals are usually people that want to gain superiority over other people by threatening to hurt animals. These people gain advantage by empowering themselves by the disadvantage of the animals. Also, people who abuse animals are more likely to abuse humans.